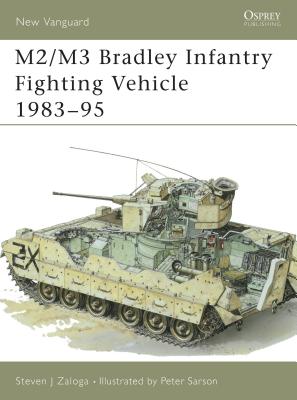 This is book number 18 in the New Vanguard series.

One of the most sophisticated armoured fighting vehicles in the world, the M2/M3 Bradley is the United States equivalent of the British Warrior, combining the role of personnel carrier with the formidable armament of a 25mm cannon and TOW anti-tank missiles. With a maximum road speed of 66kmh it also has a degree of manoeuvrability dreamed of by other armoured vehicles. In this book Steven Zaloga examines the different variants of the Bradley in detail and looks at the changing tactical requirements of the US Army for an armoured personnel carrier.
Steven J. Zaloga received his BA in History from Union College and his MA from Columbia University. He has worked as an analyst in the aerospace industry for four decades, covering missile systems and the international arms trade, and has served with the Institute for Defense Analyses, a federal think tank. He is the author of numerous books on military technology and history, including NVG 294 Allied Tanks in Normandy 1944 and NVG 283 American Guided Missiles of World War II. He currently lives in Maryland, USA.