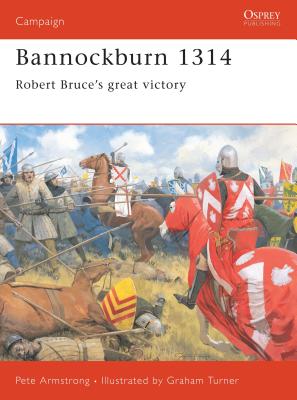 
Special Order—Subject to Availability
Osprey's study of the Battle of Bannockburn, which was part of the First War of Scottish Independence (1296-1328) and the climax of the career of King Robert the Bruce. In 1307 King Edward I of England, 'The Hammer of the Scots' and nemesis of William Wallace, died and his son, Edward II, was not from the same mould. Idle and apathetic, he allowed the Scots the chance to recover from the grievous punishment inflicted upon them. By 1314 Bruce had captured every major English-held castle bar Stirling and Edward II took an army north to subdue the Scots. Pete Armstrong's account of this pivotal campaign culminates at the decisive battle of Bannockburn that finally won Scotland her independence.
Graham Turner is a leading historical artist, specializing in the medieval period. He has illustrated numerous titles for Osprey, covering a wide variety of subjects from the dress of the 10th-century armies of the Caliphates, through the action of bloody medieval battles, to the daily life of the British Redcoat of the late 18th century. The son of the illustrator Michael Turner, Graham lives and works in Buckinghamshire, UK.