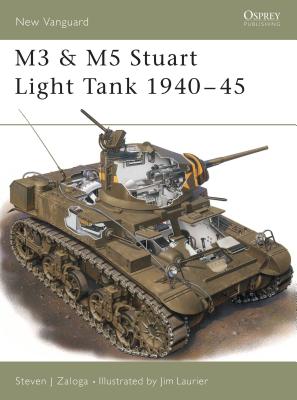 This is book number 33 in the New Vanguard series.

The M3 and M5 family of light tanks were the culmination of American tank development of the 1930s. By the time of the outbreak of the World War II, they were approaching obsolescence, as tank forces in Europe were shifting from light to medium tanks as the main element of their armored forces. First entering combat in the autumn of 1941 in the Western Desert with the British Army, the Stuart quickly proved its inadequacies. The M3 and M5 light tanks proved more suitable in the Pacific theater than in Europe, and fought successfully in many of the major battles including Guadalcanal, Tarawa and Peleliu. This title narrates this distinctive and unusual fighting vehicle's history.
Steven J. Zaloga received his BA in History from Union College and his MA from Columbia University. He has worked as an analyst in the aerospace industry for four decades, covering missile systems and the international arms trade, and has served with the Institute for Defense Analyses, a federal think tank. He is the author of numerous books on military technology and history, including NVG 294 Allied Tanks in Normandy 1944 and NVG 283 American Guided Missiles of World War II. He currently lives in Maryland, USA.