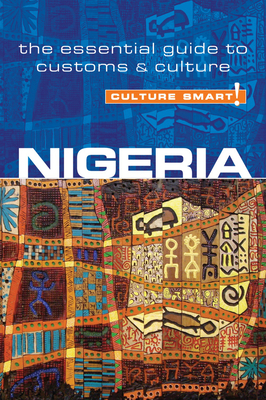 This is book number 38 in the Culture Smart! series.

Nigeria, the most populous country in Africa with an internal market of 150 million people and an economy growing at around 8 percent a year, is potentially Africa’s next powerhouse. It is nearly one and a half times the size of Texas, with a landmass varying from sandy beaches and tropical jungles, to plains, mountains, and desert.   This important West African nation is made up of 250 culturally distinct ethno-linguistic groups. The largest communities are the Hausa in the north, rooted in the Islamic city-states of the famed trans-Saharan trade routes; the Yoruba of the southwest, where ancient kingdoms nurtured some of Africa’s best-known art forms; and the Igbo of the southeast, where decentralized, egalitarian communities have produced many of the country’s most successful traders and businessmen. Nigeria has had a bad press: international reports of violence, corruption, and natural disasters completely overlook the vibrancy and artistic sophistication of its diverse cultural groups, most of whom live peacefully in mixed communities. Although Nigeria is the world’s fifth-largest producer of oil, there is a huge disparity in income. The competition for scarce resources and the country’s dense diversity have fostered ingenuity and perseverance on the part of its ambitious citizens. They are natural entrepreneurs, and intelligent and shrewd negotiators. They are also proud, and sensitive to criticism. Most are devout, gregarious, and hospitable, and disgusted by corruption. Now, in the twelfth consecutive year of democracy after years of military rule, major political and economic reforms are under way. Culture Smart! Nigeria is a unique introduction to life there today. Most of what is written about the country comes from the perspective of one or other tribe. There is nothing quite like this concise description of its major cultural traditions. The people most visitors will meet are well-educated, sophisticated, and well-versed in Western ways. Nonetheless, foreign businesspeople cannot hope to be successful without understanding the ancient and complex systems of behavior, values, and attitudes that underlie the country’s vibrant social and business life.
Diane Lemieux, is a Canadian/Dutch writer and journalist currently based in Lagos. Born in Quebec into a diplomatic family, she has lived and worked in eight countries around the world. She has a BA in Communication from the University of Ottawa in Canada, an MA in Development Studies from Leeds University in the UK, a postgraduate degree in International Relations from Amsterdam University in the Netherlands, and a diploma in journalism from Bath University in the UK. Diane has written books and articles on topics in the fields of intercultural communication, national diversity, and expatriate issues, and currently specializes in Nigerian cultural life.