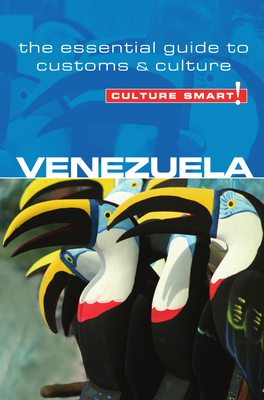 This is book number 41 in the Culture Smart! series.

An influential oil producer with a colorful and charismatic president at its helm since 1999, Venezuela is a vast, sometimes frustrating, but never dull country. It is one of the most complex countries in Latin America and one of the least understood. An ambitious attempt to benefit the poor and redistribute oil wealth by President Hugo Chavez has seen a major political transformation in recent years that has put a severe strain on its traditional ties with the USA. He has made steadfast attempts to confront his powerful northern neighbor and reduce Venezuela’s economic dependence on the United States. However, Miami remains the top holiday destination for Venezuelans traveling abroad, baseball beats soccer as the preferred sport, and teenage girls still cover their bedroom walls with American idols like Justin Bieber. Venezuelans are known for being friendly, gregarious, and outgoing. They value family over everything and love to criticize the status quo, but they are also fiercely proud and protective of their homeland and react poorly to criticism of their country from outsiders. Culture Smart! Venezuela takes you beyond the stereotypical descriptions of a tropical petro-state, famous for its beauty queens and its populist president, to provide you with an insider’s understanding of the country and its people. Practical tips, valuable insights, and vital statistics will help you get to the heart of this vibrant, sometimes contradictory, and increasingly important country.
Russell Maddicks is a BBC-trained journalist who lived in Venezuela for eleven years. He traveled the length and breadth of the country, and to finance his stay he worked in jobs that helped him to get under the skin of his adopted home: as an English teacher at the British Council; a jungle guide taking tour groups to the base of Angel Falls and the top of Roraima; a translator and interpreter; and a reporter on an English-language newspaper. There are few corners of Venezuela he hasn’t visited in his quest to explore every facet of this fascinating country. He is the author of the Bradt Guide to Venezuela (2011).