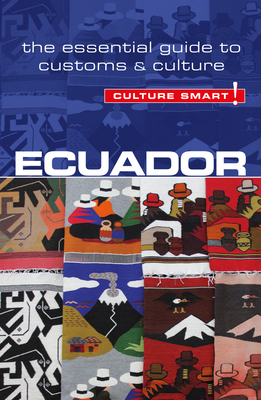 This is book number 56 in the Culture Smart! series.

Squeezed between Colombia in the north and Peru in the south, Ecuador is named for its location on the Equator and has a landscape so varied that it has been described as a microcosm of every microclimate found in South America. This diversity makes it a magnet for tourists, mountain trekkers, volunteers, and increasing numbers of US retirees looking for a warm, culturally interesting, economical, and safe place to spend much of their time. The country is booming, thanks to high oil prices and investment in tourism, and a massive infrastructure program and the poverty-reduction measures launched by President Rafael Correa have endeared him to the poorest in society. Ecuador’s multiethnic population reflects a unique blend of cultures, from traditionally dressed mountain peoples, whose ancestors inhabited their highland villages before the arrival of the Incas, to the Afro-Ecuadorians of Esmeraldas and the Chota Valley and the tribal peoples of the Amazonian rainforest. The Ecuadorians are proud, friendly, hospitable, and hardworking, but to know them well the foreign visitor needs to understand the complex historical divisions between the highlands and the coast, and the rigid class and racial hierarchy that has shaped the country’s history. Culture Smart! Ecuador takes you beyond the usual descriptions of where to go and what to see, and gives you an insider’s view of the people, their history, their food, and their culture. Special sections are designed to help food lovers get the most out of the menu, assist business travelers to gain an edge on the competition, and show expats, volunteers, and visitors how to meet and get on well with the Ecuadorians, who are as diverse and varied as the country’s amazing geography.
Russell Maddicks is a BBC-trained writer, translator, and journalist. A graduate in Economic and Social History from the University of Hull, England, he has spent the last twenty years traveling, living, and working in South and Central America, most recently as Latin American Regional Specialist for BBC Monitoring. A fluent Spanish speaker, he has made many extended trips to Ecuador, one of his favorite South American destinations, where he has explored the length and breadth of the country both for work and for pleasure. He is also the author of Culture Smart! Venezuela (2012) and the Bradt Guide to Venezuela (2011).