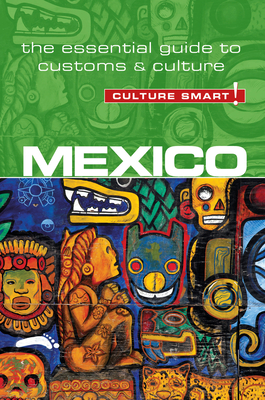 This is book number 80 in the Culture Smart! series.

Culture Smart! Mexico takes you to the heart of Mexican society. It describes how people socialize and meet members of the opposite sex, the dynamics of daily life, the central importance of family, and the annual cycle of Catholic feasts and fiestas. For business travelers there are key sections on the economy and vital insights into the general business culture. The third-largest country in Latin America, Mexico is hugely diverse, having both rural areas where time seems to have stood still and manic urban centers like Mexico City, one of the most densely populated and exciting cities in the world. Famed for its well-preserved archaeological sites, cobblestoned colonial towns, and beautiful beaches, it is a major magnet for tourists. Mexico also has a name as a creative powerhouse in the region, with world-renowned artists such as Frida Kahlo and Diego Rivera, a cinema industry that has been producing award-winning movies since the Golden Age of the 1940s, and a literary scene second to none in Latin America.
Russell Maddicks is an award-winning BBC-trained journalist, translator, and travel writer. A graduate in Economic and Social History from the University of Hull, England, he has spent the last twenty years traveling, living, and working in Latin America, most recently as a Regional Specialist for BBC Monitoring. He has visited Mexico on many extended trips, always finding some new and unusual facet to explore. He is also the author of Culture Smart! Venezuela, Culture Smart! Ecuador (which won the Gold Prize at the Pearl of the Pacific International Travel Journalism Awards at FITE in 2015), Culture Smart! Cuba, and the Bradt Guide to Venezuela.