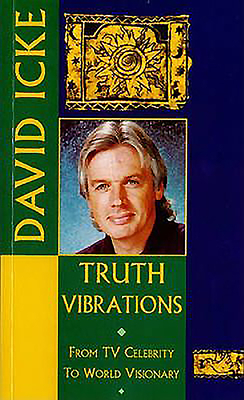 
Special Order—Subject to Availability
On 29 March 1990, David Icke visited a healer. What happened that day and in the months that followed changed his life forever. The former professional footballer, TV presenter and Green politician found himself on a wondrous journey of discovery. Guided by master souls from other dimensions, he went to Canada, the United States and all over Britain, meeting sensitives and helping to balance the disturbed earth's energy system.

The great mysteries which for centuries have baffled scientists, doctors and historians were unraveled for David Icke. Why are we here? What is the truth about God and Jesus? What happens to us when we die? What are crop circles and who makes them? The answers to all these questions and many more are revealed in 'Truth Vibrations'. More significantly, David Icke has learned what is to befall humanity and what steps we can take to reduce the physical and emotional impact of the enormous changes that are about to confront our planet and all life upon it. Nothing and no one will be the same again.
Formerly best-known as a TV sports commentator and leading spokesman for the British Green party, David Icke is a world reknowned philosopher, social visionary and tireless campaigner for truth. He credits a widely publicised spiritual transformation with giving him the courage to speak out fearlessly against lies and deceit. These days, he travels extensively, offering public talks and discussions about the belief systems and clandestine interests that shape our world. He is the author of several acclaimed titles, including 'Heal the World', 'Human Race Get Off Your Knees: The Lion Sleeps No More', 'The Robots Rebellion' and 'Truth Vibrations'.