1835: The Founding of Melbourne & the Conquest of Australia (Paperback) 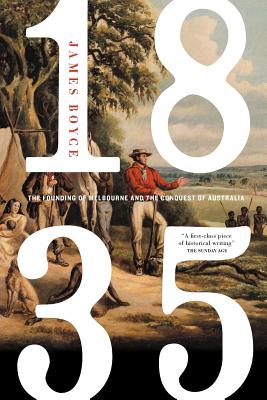 1835: The Founding of Melbourne & the Conquest of Australia (Paperback)


Not On Our Shelves—Ships in 1-5 Days
(This book cannot be returned.)
With the founding of Melbourne in 1835, a flood of settlers began spreading out across the Australian continent. In three years more land - and more people - were conquered than in the preceding fifty. In 1835 James Boyce brings this pivotal moment to life. He traces the power plays in Hobart, Sydney and London, and describes the key personalities of Melbourne's early days. He conjures up the Australian frontier - its complexity, its rawness and the way its legacy is still with us today. And he asks the poignant question largely ignored for 175 years: could it have been different? With his first book, Van Diemen's Land, Boyce introduced an utterly fresh approach to the nation's history. "In re-imagining Australia's past," Richard Flanagan wrote, "it invents a new future." 1835 continues this untold story. "Anyone who calls Melbourne home - in fact anyone who calls Australia home - should read this book." - Peter Mares "A first-class piece of historical writing. Boyce is a graceful and robust stylist and a fine storyteller." - The Sunday Age "Boyce continually reminds us of the tragic social and humanitarian consequences of expanding white settlement for the continent's original inhabitants." - The Sun Herald "An eloquent and thought-provoking book." - Australian Book Review "1835 is the best book on Australian history I have read since Van Diemen's Land. James Boyce is on a roll." - Good Reading.