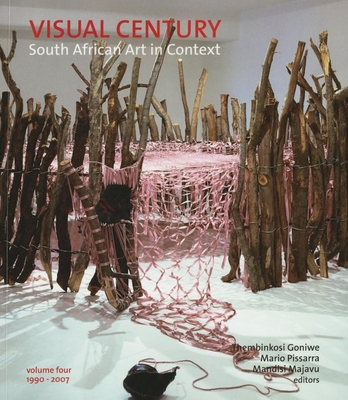 
Special Order—Subject to Availability
Visual Century: South African Art is a four-volume publication that reappraises South African visual art of the 20th century from a postapartheid perspective. It is the only publication that provides an overview of a century of South African art, with in-depth discussion by leading art historians and reproduction of a large number of artworks, providing readers with fresh perspectives on complexities that still resonate today.

The fourth and final volume in this collection looks at how the end of the Cold War and subsequent emergence of globalization, along with the advent of democracy in South Africa, introduced new social and political orders, with profound implications for South African artists. The essays critically address some of the most notable developments and visible trends in postapartheid South African art, including South Africa’s entry into the international art community, its struggle to address its past, and artists’ persistent and often provocative preoccupations with individual and collective identity. The widespread and often unsettling representation of human bodies, as well as animal forms, along with the steady increase in use of new technologies and the development of new forms of public art are also discussed. While much of the art of the period is open-ended and nondidactic, the persistence of engagement with socially responsive themes calls into question the reductive binary between ‘resistance’ and postapartheid art that has come to dominate accounts of ‘before’ and ‘after.’
Thembinkosi Goniwe is an independent curator and art historian who lectures in the department of visual arts and design at the Vaal University of Technology. Mario Pissarra is a historian and writer currently based in Cape Town. He is the founder and managing director of the Africa South Art Initiative and an honorary research associate at the University of Cape Town. Mandisi Majavu is an independent scholar and the book reviews editor of Interface: A Journal For and About Social Movements.