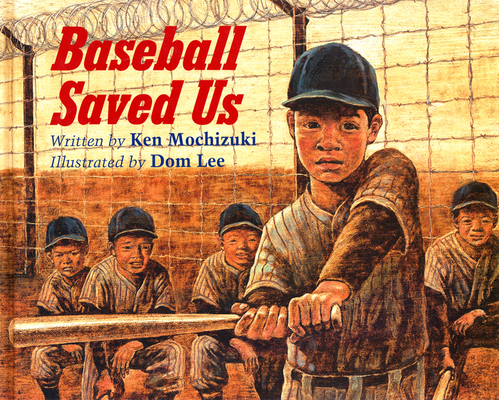 Twenty-five years ago, Baseball Saved Us changed the picture-book landscape with its honest story of a Japanese American boy in an internment camp during World War II. This anniversary edition will introduce new readers to this modern-day classic.

One day my dad looked out at the endless desert and decided then and there to build a baseball field.

Shorty and his family, along with thousands of other Japanese Americans, have been forced to relocate from their homes to a camp after the attack on Pearl Harbor, Hawaii. Fighting the heat, dust, and freezing cold nights of the desert, Shorty and the others at the camp need something to look forward to, even if only for nine innings. So they build a playing field, and in this unlikely place, a baseball league is formed. Surrounded by barbed-wire fences and guards in towers, Shorty soon finds that he is playing not only to win, but to gain dignity and self-respect as well.

Inspired by actual events, this moving story of hope and courage in a Japanese American internment camp during World War II reveals a long-hidden and ugly part of the American past. This 25th Anniversary Edition features a revised cover and a new introduction from the author and illustrator.

Ken Mochizuki is a writer, journalist, and former actor who made his picture-book debut with Baseball Saved Us. He is also the author of several other award-winning picture books published by Lee & Low, including Passage to Freedom and Heroes. Mochizuki lives in Maple Valley, Washington. His website is kenmochizuki.com. Dom Lee made his picture-book debut with Baseball Saved Us. He grew up in Seoul, South Korea, and went on to illustrate books in both the United States and Korea. His titles for Lee & Low include Ken Mochizuki's Passage to Freedom and Heroes, as well as the award-winning Sixteen Years in Sixteen Seconds. Lee's unique illustration style involves applying encaustic beeswax on paper, then scratching out images, and finally coloring the images with oil paint. Lee and his wife live in Hollis, New York.