The Untold Story of Western Civilization Vol. 2: The Age of Warrior Kings (Paperback) 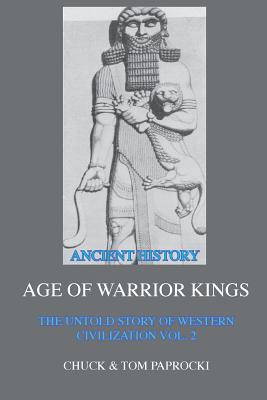 The Untold Story of Western Civilization Vol. 2: The Age of Warrior Kings (Paperback)

The purpose of our story is to understand the roots of our subconscious programming regarding gender, race, class, religion, and nationality. These are the qualities by which we identify ourselves. They are the constructs by which we live our lives. And yet, our sentimental attachments to these constructs do not allow us to think for the welfare of our species. We cannot fathom how to think or act for the benefit of the whole of humanity even though our crisis is now global in scope. Because the survival of the entire human race and the life support systems of the planet are at stake, it now becomes vital to understand what constitutes our fundamental humanity independent of such descriptors. Regardless of our gender, race, class, nation or religious divisions, we need to know what we share in common as human beings and where we stand now in our evolutionary march toward human perfection. Thus, the purpose of our story is also to understand the roots of mystical thought and how incorporating a sense of spirituality into our revolution will provide important solutions to our common dilemma. In Volume I of The Untold Story of Western Civilization, we began our journey with a look at the age of the matriarchy during which time, the clan mothers led us out of animality and, in so doing, came to play the primary role in defining early human society. The mothers created the great agricultural civilizations of the ancient world including Mesopotamia, Egypt and the Indus Valley.

In Volume II of our history, we look at the period that historians call Ancient History. It is the Age of the Warrior Kings. Beginning in Mesopotamia, Chapter I traces the evolution of the city-state empires in the Middle East and with them the rise of male city gods who come in time to replace the Great Goddess in the minds of the people. This chapter also looks at the ancient Minoan civilization, which was the last Matriarchy civilization to last into the Age of Patriarchy. Chapter One also looks at the rise of Zoroastrianism among the Aryan Persians. It concludes with the coming of Alexander the Great to the Middle East. Chapter Two looks at the birth of the Jews and the rise of Monotheism in the West. Chapter Three looks at the revolution of consciousness that occurred in the Middle East at the time of Jesus Christ when subjective consciousness discovered its ability to communicate directly with the subjective consciousness of Divinity. This led Jesus Christ to say "The Kingdom of God is within." Chapter Four looks at the rise of the Church of Rome (the Catholic Church) and its slander and ultimate persecution of the Jewish and Gentile Christian mystics whom the Church derisively called "Gnostics." The chapter discussed the rise of religions in the wake of spiritual masters and the split that always occurs between the mystics who follow the teachings of the masters versus the politicians who for their part would rather dominate the religious institution that will purportedly spread the word of the master to humanity.