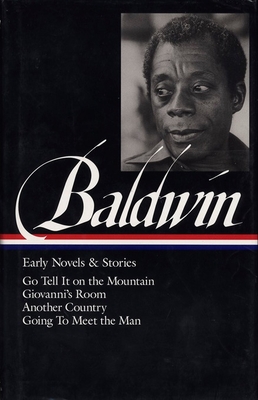 This is book number 2 in the Library of America James Baldwin Edition series.

Here, in a Library of America volume edited by Nobel laureate Toni Morrison, is the fiction that established James Baldwin's reputation as a writer who fused unblinking realism and rare verbal eloquence. His first novel, Go Tell It on the Mountain (1953), tells the story, rooted in Baldwin's own experience, of a preacher's son coming of age in 1930's Harlem. Ten years in the writing, its exploration of religious, sexual, and generational conflicts was described by Baldwin as "an attempt to exorcise something, to find out what happened to my father, what happened to all of us." Giovanni's Room (1956) is a searching, and in its day controversial, treatment of the tragic self-delusions of a young American expatriate at war with his own homosexuality. Another Country (1962), a wide-ranging exploration of America's racial and sexual boundaries, depicts the suicide of a gifted jazz musician and its ripple effect on those who knew him. Complex in structure and turbulent in mood, it is in many ways Baldwin's most ambitious novel. Going to Meet the Man (1965) collects Baldwin's short fiction, including the masterful "Sonny's Blues," the unforgettable portrait of a jazz musician struggling with drug addiction in which Baldwin came closest to defining his goal as a writer: "For, while the tale of how we suffer, and how we are delighted, and how we may triumph is never new, it must be heard. There isn't any other tale to tell, it's the only light we've got in all this darkness."

LIBRARY OF AMERICA is an independent nonprofit cultural organization founded in 1979 to preserve our nation’s literary heritage by publishing, and keeping permanently in print, America’s best and most significant writing. The Library of America series includes more than 300 volumes to date, authoritative editions that average 1,000 pages in length, feature cloth covers, sewn bindings, and ribbon markers, and are printed on premium acid-free paper that will last for centuries.
With the novel Go Tell It on the Mountain (1953), a distillation of his own experiences as a preacher’s son in 1930s Harlem, and the essay collection Notes of a Native Son (1955), James Baldwin (1924-1987) established himself as a prophetic voice of his era. Some such voices may grow fainter with the passage of time, but Baldwin remains an inescapable presence, not only a chronicler of his epoch but a thinker who helped shape it.

Toni Morrison, volume editor, is the author of a number of award-winning novels, including Love, Jazz, Beloved, Song of Solomon, Sula, and The Bluest Eye. She was awarded the Nobel Prize for Literature in 1993.
“James Baldwin’s gift to our literary tradition is that rarest of treasures, a rhetoric of fiction and the essay that is, at once, Henry Jamesian and King Jamesian.” —Henry Louis Gates, Jr.