In Little Need of Divine Intervention: Takezaki Suenaga's Scrolls of the Mongol Invasions of Japan (Paperback) 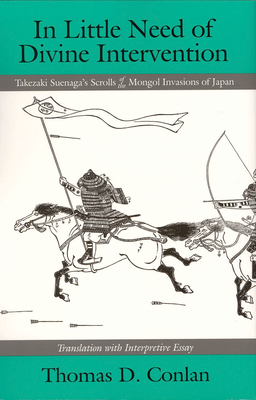 In Little Need of Divine Intervention: Takezaki Suenaga's Scrolls of the Mongol Invasions of Japan (Paperback)

In Little Need of Divine Intervention presents a fundamental revision of the thirteenth-century Mongol Invasions of Japan by revealing that the warriors of medieval Japan were capable of fighting the Mongols to a standstill without the aid of any divine winds or kamikaze. Conlan's interpretation of the invasions is supplemented with translations of the picture scrolls commissioned by Takezaki Suenaga, a warrior who fought against the Mongols. In addition, translations of nearly seventy administrative documents are provided, thereby enabling students of Japanese history reconstruct the invasions using contemporary sources. A rare copy of Takezaki Suenaga's Scrolls, reproduced in full, reveals hitherto unknown missing scenes. Furthermore, the scrolls' images can be now read in tandem with its narrative passages, translated in English for the first time. Please note that the entire book was intentionally printed from back to front, so that the reproduced scrolls unfold in Japanese order, from right to left. Thus the book's spine is on the right. This monograph will prove to be of great interest for students and scholars of medieval Japanese history, warrior culture, and the nature of Japan in an East Asian context.

Thomas Conlan is Associate Professor of History and Asian Studies at Bowdoin College. He has recently published The Nature of Warfare in Fourteenth Century Japan, in the Summer 1999 issue of the Journal of Japanese Studies, and is currently preparing a monograph about warfare in fourteenth-century Japan for publication. Current research topics include the judicial role of violence, and the political role of Esoteric Buddhism.