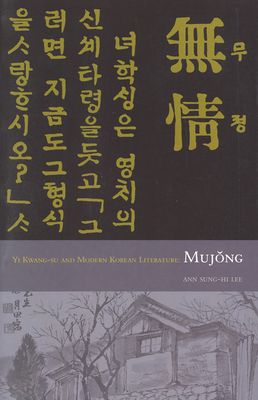 Yi Kwang-su (1892-1950) was one of the pioneers of modern Korean literature. When the serialization of Mujong (The Heartless) began in 1917, it was an immediate sensation, and it occupies a prominent place in the Korean literary canon. The Heartless is the story of a love triangle among three youths during the Japanese occupation. Yi Hyōng-sik is a young man in his mid-twenties who is teaching English at a middle school in Seoul. Brilliant but also shy and indecisive, he is torn between two women. Kim Sōn-hyōng is from a wealthy Christian family; she has just graduated from a modern, Western-style school and is planning on continuing her studies in the United States. Pak Yōng-ch'ae is a musically gifted young woman who was raised in a traditional Confucian manner; due to family misfortune, she has become a kisaeng but remains devoted to Hyōng-sik whom she knew as a child. The Heartless goes beyond the level of romantic melodrama and uses these characters to depict Korea's struggles with modern culture and national identity. A long critical introduction discusses Yi Kwang-su's life and work from his birth in 1892 to the publication of his first novel The Heartless in 1917. It contains in-depth analyses of the novel, Yi Kwang-su's literary theory, and early short stories.