The Child Custody Book (Rebuilding Books; For Divorce and Beyond) (Paperback) 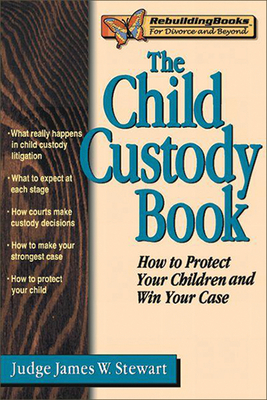 The Child Custody Book (Rebuilding Books; For Divorce and Beyond) (Paperback)


Not On Our Shelves—Ships in 1-5 Days
(This book cannot be returned.)
"It is almost always in your children's best interest to settle a case--with or without mediation--rather than to litigate in court," said Judge Stewart. His book fully, clearly, and concisely explains the process of court child custody litigation. It shows how custody decisions are made, what can be expected at each stage of the process, and how parents can insure that their abilities are clearly presented to persons with influence over the custody decision. It is intended to eliminate surprises that could lead to costly mistakes along the way. Parents who settle custody disputes out of court will not only save tens of thousands of dollars, but will have avoided the rancor and hostility of a custody trial that makes future cooperation in raising the children almost impossible. With help from a capable and experienced attorney, this book will allow the reader to present her/his case for custody in its best possible light. A must-read for divorcing parents, custody evaluators, family psychologists, and marriage and family therapists.
James W. Stewart has dedicated his career as a Superior Court judge to families and children involved in the divorce process. With almost twenty years on the bench, Stewart has served four years as the supervising judge of the Family Court Division of the Santa Clara County Superior Court and two years as a supervising judge of the Palo Alto Division. He has been a member of the California Fair Political Practices Commission and the Family Law Advisory Committee to the Judicial Council. He has taught family law to attorneys on behalf of the Rutter Group and Continuing Education of the Bar, and is currently engaged as a private family law judge and mediator, hearing cases that, at the request of the parties, have been assigned to him from public courts. He also occasionally sits on assignment to the public courts by the Judicial Council of California. He is a graduate of Stanford University.