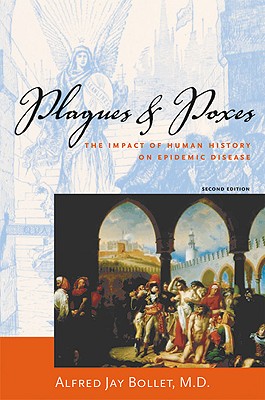 
Special Order—Subject to Availability
Since publication of the initial version of Plagues & Poxes in 1987, which had the optimistic subtitle The Rise and Fall of Epidemic Disease, the rise of new diseases such as AIDS and the deliberate modification and weaponization of diseases such as anthrax have changed the way we perceive infectious disease.

With major modifications to deal with this new reality, the acclaimed author of Civil War Medicine: Challenges and Triumphs has updated and revised this series of essays about changing disease patterns in history and some of the key events and people involved in them. It deals with the history of major outbreaks of disease - both infectious diseases such as plague and smallpox and noninfectious diseases - and shows how they are in many cases caused inadvertently by human actions, including warfare, commercial travel, social adaptations, and dietary modifications. To these must now be added discussion of the intentional spreading of disease by acts of bioterrorism, and the history and knowledge of those diseases that are thought to be potential candidates for intentional spread by bioterrorists.

Among the many topics discussed are:

How the domestication of animals allowed diseases of animals to affect humans, or perhaps become genetically modified to become epidemic human diseases.

Why the concept of deficiency diseases was not understood before the early twentieth century disease, after all, was the presence of something abnormal, how could it be due to the absence of something? In fact, the first epidemic disease in human history probably was iron deficiency anemia.

How changes in the availability and nature of specific foods have affected the size of population groups and their health throughout history. The introduction of potatoes to Ireland and corn to Europe, and the relationship between the modern technique of rice milling and beriberi, all illustrate the fragile nutritional state that results when any single vegetable crop is the main source of food.

Why biological warfare is not a new phenomenon. There have been attempts to intentionally cause epidemic disease almost since the dawn of recorded history, including the contamination of wells and other water sources of armies and civilian populations of course, the spread of smallpox to Native Americans during the French and Indian War is known to every schoolchild. With our increased technology, it is not surprising that we now have to deal with problems such as weaponized spores of anthrax.