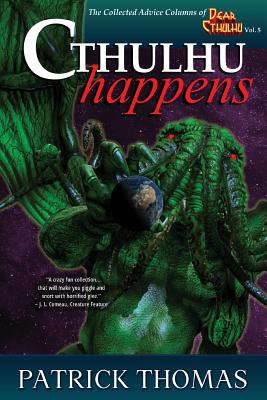 This is book number 5 in the Dear Cthulhu series.

Cthulhu will one day rise up to claim the Earth and its inhabitants as his own.
The Great Old One has looked upon Humankind and found it lacking.
Cthulhu has deemed it necessary to prepare Humankind for his coming
Thus, Cthulhu now answers humanity's questions to help them better themselves.

I don't know if you're familiar with the new app Pokey-A-Guy Go, but it's all the rage. You take your phone and it uses the GPS to capture these mythical creatures on your phone in order to play a game. This game has changed my life and I don't even use it. Unfortunately, the program has put one of the rarest Pokey-A-Guy creatures in the middle of my living room. Ever since this got out, I've been having people breaking into my house day and night in order to get this Pokey-A-Guy. I've called the company and they had been less than responsive to my requests to change it. It's running into serious money. I've had to replace my window broken windows seven times and have even had to get the locks and even the door when it got knocked in on the door fixed. The police are getting tired of responding to the break-ins. It's driving me nuts. What can I do?

The first thing you need to do is shore up your security and get better doors and lock. Then install video monitors and put up signs stating that you will prosecute. I know you said you did not have much money but my next bit of advice will help you to more than pay for it. If these gamers are so fanatical that they'd be breaking into your home to get this virtual creature, then offer them the chance to come in and capture it for a hundred bucks each. This way you get a chance to control the traffic flow and take in some extra cash and these people get to play their game. It's a win-win for everyone.