Cthulhu Explains It All: A Dear Cthulhu Collection (Paperback) 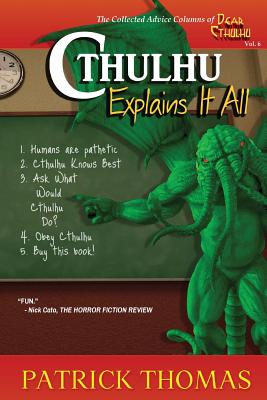 Cthulhu Explains It All: A Dear Cthulhu Collection (Paperback)

This is book number 6 in the Dear Cthulhu series.

Lost? Scared? Confused? Don't worry because Cthulhu Explains It All

As far as I'm concerned, I'm one of the most accomplished women - no, people - in the entire history of the world. Why just in the last month I have cured someone of cancer, won the Boston Marathon, spent time on the international space station, won Nobel Prizes for peace and for my chocolate souffl . And modesty forbids me from going into detail about my threesome with Tom Cruise and Hugh Jackman, but it was hot The problem is most people don't take my accomplishments seriously and I'm not sure if it's because I'm a woman or because I did it all in my dreams. That's right, I'm the ultimate dream warrior. Yet despite everything I've managed to do, when I offer people the benefit of my wisdom and experience, they often make fun of me and ignore what I'm telling them to do. When I told my one friend they could get rid of her cancer by using stem cells and a hot glue gun, she looked at me as if I was mad. But she did ask her doctor. That quack said no one had ever heard of such a thing. When I called Harvard to have them send me a copy of my diploma, they said they had no record of it and hung up on me when I explained how I dreamed I had graduated from there with high honors with a dual major in brain surgery and philosophy. Then the other night when I was out at a five-star restaurant, I snuck back into the kitchen to give the chef a couple of pointers, telling him that butterscotch and curry were the keys to making the best duck l'orange that he'd ever taste. You'd think someone in his position would be thrilled to get advice from someone like me, but no. He had security throw me out and wouldn't even give me my food in a doggie bag. So my dear Cthulhu, as one of the few on this planet who is accomplished as I am, how do I get people to take my experiences seriously? (Oh and I have some included some pointers for you as an attachment on how to terrorize and take over the planet. You're going to love it.)

There is a reason why people do not take your claims of skill and experience seriously - they are utter nonsense. In human, dreams are your minds way of processing the day's events and dealing with stress. The events of life influence your dreams, not the other way around, unlike Cthulhu whose dreams can influence the entire world and universe. In fact. right now Cthulhu might lie dreaming and when I awake you will find that you have been nothing but a figment of that dream and I will either make you cease to be or live in horror and terror, depending on my mood that day.