Underworld: Exploring the Secret World Beneath Your Feet (Hardcover) 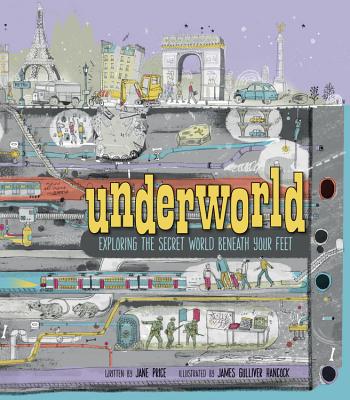 Underworld: Exploring the Secret World Beneath Your Feet (Hardcover)


Special Order—Subject to Availability
With the intriguing idea of exploring what lies below the surface of the Earth as its broad theme, this fascinating book cleverly dices up the subject into small, more manageable pieces ready to be devoured by young readers, particularly boys. The basics are covered in detail, such as the physical properties of the Earth's crust (including its unusual features such as volcanoes and caves), as well as animals with underground habitats. There is a treasure trove of information on the uses humans have made of the underground --- from bunkers used during wartime, to burial sites, to the Paris Métro --- as well as possibilities for the future, even on Mars! What makes this book truly unique, however, are the less expected subjects it covers --- fully examining, for example, the subterranean city of Cappadocia, where early Christians hid from Roman soldiers; King Tut's tomb and its alleged curse; and the underground dungeons used for torture in medieval castles.This is an extraordinary resource for earth science or social sciences lessons covering any number of diverse subjects, from paleontology to archaeology, from mythology to ancient civilizations and from engineering to agriculture. The format is conducive to browsing, with every topic covered on a two-page spread. The text by Jane Price is easy to read and accessible, and engaging illustrations by James Gulliver Hancock, along with many photographs, help to visualize the sometimes-complicated concepts. Boxes, fun facts and funny captions keep things lively and entertaining. A generous index helps with navigation.
James Gulliver Hancock is an illustrator whose books include Underworld, How Cities Work and All the Buildings in New York. He divides his time between Brooklyn, New York, and Sydney, Australia.
A scattershot but revealing dig beneath our planet's surface, illustrated with a mix of photos and schematic cutaways.—Kirkus Reviews

Readers who dream of spelunking or who simply want to dive into a well (of information) will find much to ponder---bats and naked mole rats get spreads of their own, as does the curse of King Tut and the 2010 Chilean mine collapse---in this lively and accessible exploration.—Publishers Weekly

The informative text and illustrations are sure to hold the attention of readers and spark interest in further research of the topics.—School Library Journal

Jane Price gives curious young readers a sense of realms hidden from most of us ... Photographs convey the grandeur and amazing formations of certain caves, and James Gulliver Hancock's cross-section illustration of a cave city shows how it was organized in a way no photograph could.—The Washington Post

Elementary boys will devour this nonfiction book about everything underground from tombs to cities and much more.—Library Media Connection