Fast Sailing and Copper-Bottomed: Aberdeen Sailing Ships and the Emigrant Scots They Carried to Canada, 1774-1855 (Paperback) 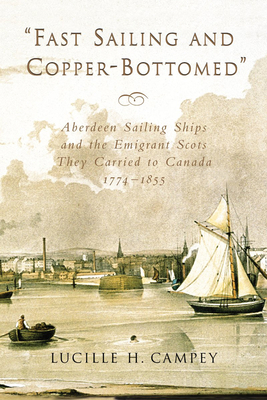 Fast Sailing and Copper-Bottomed: Aberdeen Sailing Ships and the Emigrant Scots They Carried to Canada, 1774-1855 (Paperback)

The days when Aberdeen's fast sailing and copper-bottomed ships carried emigrant Scots to Canada are brought to life in this fascinating account of the northern Scotland exodus during the sailing ship era. Taking readers through new and little-used documentary sources, Lucille H. Campey finds convincing evidence of good ships, sailed by experienced captains and managed by reputable people, thus challenging head on the perceived imagery of abominable sea passages in leaking old tubs. And by considering the significance of ship design and size, she opens a new window on our understanding of emigrant travel. Instead of concentrating on the extreme cases of suffering and mishaps, to be found in anecdotal material, Campey's approach is to identify all of the emigrant sea crossings to Canada made on Aberdeen sailing ships.

Observing the ships which collected passengers from the port of Aberdeen as well as those which collected emigrants at Highland ports, especially Cromarty and Thurso, Campey reveals the processes at work and the people who worked behind the scenes to provide the services. Her following of the emigrant Scots on to their New World destinations in New Brunswick, Nova Scotia and Upper Canada provides us with an opportunity to see how events in Canada were influencing both the decision to emigrate and choice of location. These emigrant Scots succeeded, often after difficult beginnings, and would endow Canada with their rich traditions and culture which live on to this day.

Dr. Lucille Campey is a Canadian, living in Britain, with over thirty years of experience as a researcher and author. It was her father's Scottish roots and love of history that first stimulated her interest in the early exodus of people from Scotland to Canada. She is the great-great-granddaughter of William Thomson, who left Morayshire, on the northeast coast of Scotland, in the early 1800s to begin a new life with his family, first near Digby, then in Antigonish, Nova Scotia. He is described in D. Whidden's History of the Town of Antigonish simply as William, Pioneer and is commemorated in the St. James Church and Cemetery at Antigonish. Lucille's mother, Cecile Morency, who was born in Ste-Marie-de-Beauce, is a descendant of Guillaume Baucher dit Morency, who settled in Ile d'Orleans in 1659. Lucille was awarded a Ph.D. by Aberdeen University in 1998 for her research into Scottish emigration to Canada in the period 1770-1850. Lucille has published six books on the subject of emigrant Scots to Canada. Described by the P.E.I. Guardian as indispensable to Islanders of Scottish ancestry, her first book, A Very Fine Class of Immigrants: Prince Edward Island's Scottish Pioneers 1770-1850 (Natural Heritage, 2001), gives the most comprehensive account to date of the Scottish influx to the Island. Her second book, Fast Sailing and Copper-Bottomed: Aberdeen Sailing Ships and the Emigrant Scots They Carried to Canada 1774-1855 (Natural Heritage, 2002), gives a gripping account of emigrant shipping from the north of Scotland to Canada in the sailing ship era. Her third book, The Silver Chief: Lord Selkirk and the Scottish Pioneers of Belfast, Baldoon and Red River (Natural Heritage, 2003), examines the three Selkirk settlements in Canada. According to the distinguished genealogist and author Ryan Taylor the three titles now stand as a significant contribution to Canadian immigrant literature. Her fourth book is After the Hector: The Scottish Pioneers of Nova Scotia and Cape Breton, 1773-1852 (Natural Heritage, 2004), her fifth is The Scottish Pioneers of Upper Canada, 1784-1855: Glengarry and Beyond (Natural Heritage, 2005), and her sixth book is Les Ecossais: The Pioneer Scots of Lower Canada, 1763-1855 (Natural Heritage, 2006). A seventh book, which will deal with emigration from Scotland to New Brunswick, will be published by Natural Heritage in Spring 2007. A chemistry graduate of Ottawa University, Lucille worked initially in the fields of science and computing. After marrying her English husband, she moved to the north of England, where she became interested in medieval monasteries and acquired a Master of Philosophy Degree (on the subject of medieval settlement patterns) from Leeds University. Having lived for five years in Easter Ross, in the north of Scotland, while she completed her doctoral thesis, she and Geoff returned to England, and now live near Salisbury in Wiltshire.