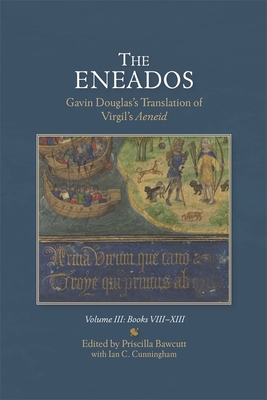 This is book number 19 in the Scottish Text Society Fifth series.

Third and final volume of a new edition of Douglas's Eneados, containing a substantially revised and corrected text of Books VIII-XIII plus appendix of textual variants. Although Virgil's Aeneid was one of the most widely admired works of the European Middle Ages, the first complete translation to appear in any form of English was Gavin Douglas's magisterial verse rendering into Older Scots, completed in 1513, which he called the Eneados. It included not only the twelve books of Virgil's original, but a thirteenth, added by the Italian humanist scholar Maphaeus Vegius, and lively, original prologues to every book. This new edition, the first for over sixty years, is based on Cambridge, Trinity College Library MS O.3.12 and presents a substantially revised and corrected version of the previous version's text and variants. Following from the first volume, containing a vastly expanded Introduction and Commentary, and volume II, providing the text and variants for Books VIII-XII, Volume III completes the edition with the text and variants for Books VIII-XIII.