Rupture and Reconstruction: The Transformation of Modern Orthodoxy (Hardcover) 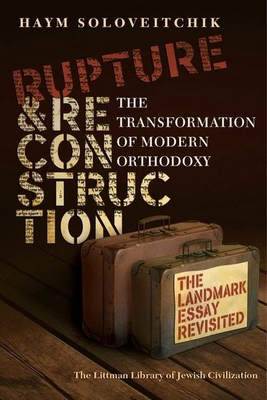 Rupture and Reconstruction: The Transformation of Modern Orthodoxy (Hardcover)


Not On Our Shelves—Ships in 1-5 Days
The essay that forms the core of this book is an attempt to understand the developments that have occurred in Orthodox Jewry in America in the last seventy years, and to analyse their implications. The prime change is what is often described as 'the swing to the right', a marked increase in ritual stringency, a rupture in patterns of behaviour that has had major consequences not only for Jewish society but also for the nature of Jewish spirituality. For Haym Soloveitchik, the key feature at the root of this change is that, as a result of migration to the 'New Worlds' of England, the US, and Israel and acculturation to its new surroundings, American Jewry-indeed, much of the Jewish world- had to reconstruct religious practice from normative texts: observance could no longer be transmitted mimetically, on the basis of practices observed in home and street. In consequence, behaviour once governed by habit is now governed by rule. This new edition allows the author to deal with
criticisms raised since the essay, long established as a classic in the field, was originally published, and enables readers to gain a fuller perspective on a topic central to today's Jewish world and its development.