The Surrender of Silence: A Memoir of Ironfoot Jack, King of the Bohemians (Paperback) 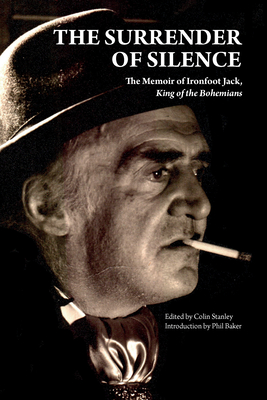 The Surrender of Silence: A Memoir of Ironfoot Jack, King of the Bohemians (Paperback)


Special Order—Subject to Availability
The life of escape artist, fortune-teller, author and raconteur “Ironfoot Jack,” aka Jack Rudolph Neave (1881–1959), the self-styled “King of the Bohemians” in London's Soho.

“I became acquainted with gipsies, with show people, with buskers, with people who entertained the public by performing in the city, on fair grounds and market places…and with a variety of “fiddles”—that is, some dubious methods of obtaining the means of life. I became a member of this fraternity.”
—from The Surrender of Silence

Escape artist, fortune-teller, author, and raconteur “Ironfoot Jack,” aka Jack Rudolph Neave (1881–1959), the self-styled “King of the Bohemians,” was a well-known Soho character in pre- and postwar London. His rich and enthralling story of a lifestyle now gone forever was dictated as his portrait was being painted by the artist Timothy Whidborne in 1956. It was then entrusted to a Soho acquaintance, the author Colin Wilson whose first book The Outsider, had been a success in the same year. Despite his efforts, Wilson failed to find a publisher and, after his death, the manuscript was discovered among his papers by his bibliographer Colin Stanley, who assembled the text, which is accompanied by a contextual introduction by cultural historian Phil Baker.

Jack wrote that The Surrender of Silence was “the outcome of years of struggle to survive; of solving the problem of existence by various and curious methods… Most of the people I am talking about led a precarious life and obtained their livelihood from day to day…. They worked to live; they did not live to work.”

This Strange Attractor Press edition is the first publication of this legendary work.

Colin Stanley is an author and the editor of Colin Wilson Studies.

Phil Baker's other books include The Dedalus Book of Absinthe, a biography of Dennis Wheatley, The Devil is a Gentleman, and critical works on Samuel Beckett and William Burroughs. He lives in London.
A fascinating journey into a forgotten world, with Ironfoot Jack as our eccentric guide.—Magonia Review of Books—