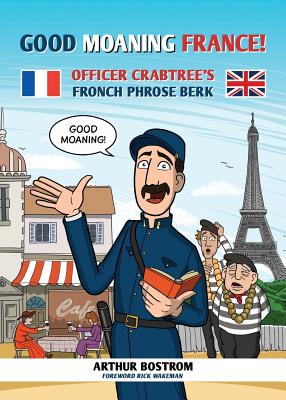 Now you can 'spook Fronch' like the policeman in 'Allo 'Allo Based on a favourite character from the BBC TV sitcom. In this delightful book, Officer Crabtree's masterly grasp of Fronch falls under the spotlight as never before. From 'Ploose may I hov a kippy of the dooly nosepooper?' to 'frigs logs', 'scrimbled oggs' and 'fosh and chops' the book is a tribute to mangled words and phrases. Arthur Bostrom, who played Officer Crabtree on stage and screen, mixes vowels and pronunciation trying to educate those less gifted in the French longwodge.

Which bonk do you bonk with?

Would you lick a drunk?

Illustrated by John Cooper and ideal for travellers and fans of 'Allo 'Allo alike, Good Moaning France is a wake-up call for anyone who thinks they are competent in French (or English or any other language). Readers' questions are answered in Ask Crabtree, there are examples from Crabtree's poloce newtberks and a most unhelpful Undex. In a Foreword music legend Rick Wakeman recalls how he fell off his chair laughing on seeing the character created by screenwriters David Croft and Jeremy Lloyd at the start of the second series (the book is published by permission).