"Everything Worked Like Clockwork...": The Mechanization of British Regular and Household Cavalry 1918-1942 (Wolverhampton Military Studies) (Hardcover) 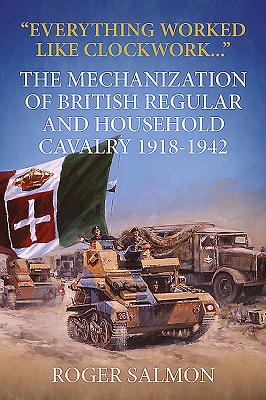 "Everything Worked Like Clockwork...": The Mechanization of British Regular and Household Cavalry 1918-1942 (Wolverhampton Military Studies) (Hardcover)


Special Order—Subject to Availability
The mechanization of British and Household Cavalry regiments took place between the two World Wars and on into 1942. This book describes the process by which many horsed cavalrymen were retrained to operate and fight in Armoured Fighting Vehicles (AFVs) and the experiences of some of the men and regiments involved. Extensive use has been made of regimental and War Office archives, and particularly from the Imperial War Museum's sound archives - the oral testimonies of soldiers who had experienced this huge change. A small number of veterans are, or were, still living and were interviewed by the author for this work. The reason given for the delay in cavalry mechanization - cited in some military histories and much influenced by the writings of Sir Basil Liddell Hart - was the reluctance by the cavalrymen to part with their horses and their technophobic attitude. This book tests the accuracy of this assertion, together with what was the availability of suitable and sufficient armored fighting vehicles to replace the cavalry's horses. Of special interest is the examination of the historical papers of the tank manufacturers Vickers, held at the Cambridge University Library, regarding tank development and production. This story of mechanizing the cavalry has been set against the backdrop of the social, economic and political climate of the 1920s and 1930s, and the pressure on politicians of the wider franchise and public opinion. In researching this aspect, the Britain by Mass Observation archives - held at the University of Sussex - have been most illuminating. The interwar impact on cavalry mechanization; the role of the British Army in general; disarmament; and rearmament are describe - again with illustrations from oral testimonies.