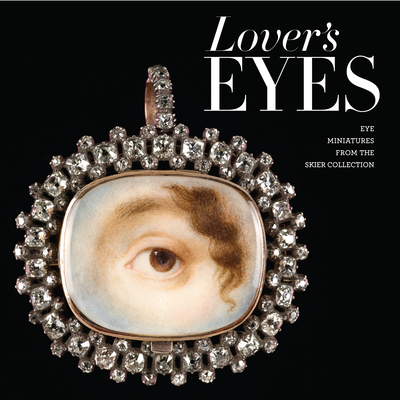 A significant addition to the fascinating study of rare and intriguing late 18th- and early 19th-century eye miniatures.

Until the early 2000s, little had been written about eye miniatures or "Lover's Eyes", and their short-lived popularity at the end of the eighteenth- and early nineteenth-centuries, when hand-painted portraits of single human eyes were set in jewelry, or created to memorialize a deceased loved one. This volume examines their role in the broader context of Georgian and early Victorian portrait miniatures; and looks in detail at the creation, and appeal, of these extraordinary objects.

Dr and Mrs. David A. Skier's collection of eye miniatures is one of the most complete collections of this genre of miniature painting in existence. This volume features over 130 pieces from the Skier Collection, with 36 extraordinary newly acquired pieces, including two of the three known existing "Lover's Lips", and six examples of a delightful sub-category known as "Flower Eyes". There are illustrated essays on forgeries and fakes of lovers' eyes, on "Flower Eyes", on the persistence of the eye image which continues the tradition of lovers' eyes, and an essay on the eye miniatures created by Richard Cosway.

Elle Shushan is a dealer, author, lecturer, and museum consultant in the field of portrait miniatures. Among her clients are the Nelson-Atkins Museum of Art, the Museum of Fine Arts, Boston, the Metropolitan Museum of Art and the Philadelphia Museum of Art. Shushan has published numerous articles on portrait miniatures, in addition to contributing essays for museum publications. As a dealer, she has exhibited at TEFAF Maastricht and New York, The Winter Show, New York, and Masterpiece London. Graham C. Boettcher, Ph.D., is the R. Hugh Daniel Director of the Birmingham Museum of Art, Birmingham, Alabama. He previously served as the museum's William Cary Hulsey Curator of American Art, overseeing the collections of pre-1945 American fine and decorative art. Boettcher's publications include contributions to American Sublime: Landscape Painting in the United States, 1820-1880 (2002); Life, Liberty, and the Pursuit of Happiness: American Art from the Yale University Art Gallery (2008); and Scandinavian Design and the United States, 1890-1980(2020). Among his many exhibitions are The Look of Love: Eye Miniatures from the Skier Collection, which was included among the "Season's Best Museum Shows" by Architectural Digest in 2012, and Black Like Who?: Exploring Race & Representation (with Dr. Kelli Morgan, 2015), which was named a "Don't Miss" exhibition by the Wall Street Journal. Stephen Lloyd is curator of the Derby Collection at Knowsley Hall, Merseyside, England. His doctoral thesis (Oxford University) on Richard and Maria Cosway formed the basis of his 1995-96 exhibition at the Scottish National Portrait Gallery in Edinburgh and at the National Portrait Gallery in London. From 1993 to 2009 he was assistant keeper and then senior curator at the Smithsonian National Portrait Gallery (SNPG), where he curated many exhibitions on portrait miniatures and on art in Scotland around 1800. In 2008-9 he curated (with Kim Sloan) at the SNPG and the British Museum the exhibition The Intimate Portrait: Drawings, Miniatures and Pastels from Ramsay to Lawrence. He has edited two collections of essays, Henry Raeburn: Context, Reception and Reputation (with Viccy Coltman, 2012) and Art, Animals and Politics: Knowsley and the Earls of Derby (2016).