Maxims extracted from Poor Richard's Almanac: With introduction by Aziloth Books; and The Way to Wealth (Paperback) 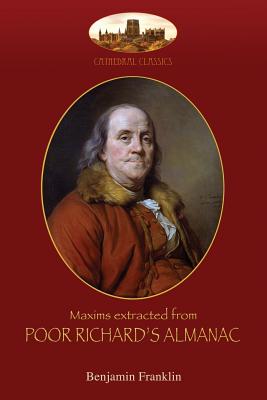 Maxims extracted from Poor Richard's Almanac: With introduction by Aziloth Books; and The Way to Wealth (Paperback)

As timeless expressions of wit and wisdom, the maxims in Poor Richard's Almanac are as popular today as they were in eighteenth century colonial America.

The author behind the pseudonym of Poor Richard, or Richard Saunders, was none other than Benjamin Franklin, the renowned American scientist, statesman and publisher. Franklin presented his Poor Richard character as a man of humble means with aspirations to better himself through hard work and temperate living and the urge to share this wisdom with his fellow citizens.

Popular periodicals in Franklin's day, almanacs aimed both to inform and entertain their readership and Poor Richard's Almanac delivered on both counts with great success. Each annual edition consisted of a short introduction followed by poems, proverbs, a calendar of meteorological and astronomical charts, practical household hints, puzzles and often a serial story that ended on a cliff-hanger to ensure the next instalment was purchased.

What made Franklin's almanac stand out was his signal use of witty wordplay and his collection of short, humorous truisms. Over the 26 years of publication - from 1732 to 1758 - his almanac became a household name in Philadelphia, with two-thirds of the population buying a copy every year.

This edition by Aziloth Books collates the maxims from each edition and includes the "The Way to Wealth", Franklin's famous distillate of Poor Richard's quotes that was published in the last issue of the almanac.