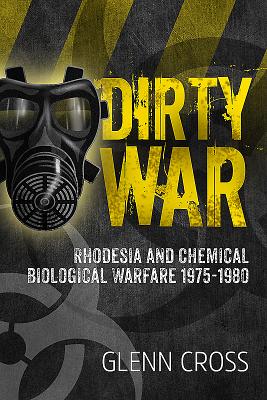 
Special Order—Subject to Availability
Dirty War is the first comprehensive look at the Rhodesia's top secret use of chemical and biological weapons (CBW) during their long counterinsurgency against native African nationalists. Having declared its independence from Great Britain in 1965, the government--made up of European settlers and their descendants--almost immediately faced a growing threat from native African nationalists. In the midst of this long and terrible conflict, Rhodesia resorted to chemical and biological weapons against an elusive guerrilla adversary. A small team made up of a few scientists and their students at a remote Rhodesian fort to produce lethal agents for use. Cloaked in the strictest secrecy, these efforts were overseen by a battle-hardened and ruthless officer of Rhodesia's Special Branch and his select team of policemen. Answerable only to the head of Rhodesian intelligence and the Prime Minister, these men working alongside Rhodesia's elite counterguerrilla military unit, the Selous Scouts, developed the ingenious means to deploy their poisons against the insurgents. The effect of the poisons and disease agents devastated the insurgent groups both inside Rhodesia and at their base camps in neighboring countries. At times in the conflict, the Rhodesians thought that their poisons effort would bring the decisive blow against the guerrillas. For months at a time, the Rhodesian use of CBW accounted for higher casualty rates than conventional weapons. In the end, however, neither CBW use nor conventional battlefield successes could turn the tide. Lacking international political or economic support, Rhodesia's fate from the outset was doomed. Eventually the conflict was settled by the ballot box and Rhodesia became independent Zimbabwe in April 1980. Dirty War is the culmination of nearly two decades of painstaking research and interviews of dozens of former Rhodesian officers who either participated or were knowledgeable about the top secret development and use of CBW. The book also draws on the handful of remaining classified Rhodesian documents that tell the story of the CBW program. Dirty War combines all of the available evidence to provide a compelling account of how a small group of men prepared and used CBW to devastating effect against a largely unprepared and unwitting enemy. Looking at the use of CBW in the context of the Rhodesian conflict, Dirty War provides unique insights into the motivation behind CBW development and use by states, especially by states combating internal insurgencies. As the norms against CBW use have seemingly eroded with CW use evident in Iraq and most recently in Syria, the lessons of the Rhodesian experience are all the more valid and timely.