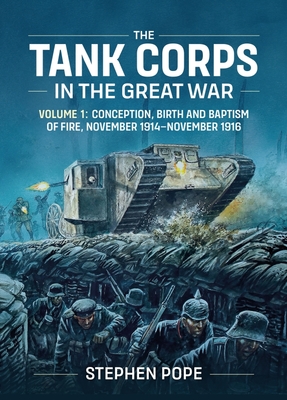 
Special Order—Subject to Availability
This is the first volume of a new six volume history of the Tank Corps during the First World War. The first history was written shortly after the end of the Great War by Lt Col JFC Fuller in 1919. This, and the subsequent version written by Sir Basil Liddell Hart in 1959, provided a broad overview of the origins of the Tank Corps but did not undertake detailed analysis of the tank actions and the changes introduced in the organization or operation of tank units as a result of the lessons learned. This new history seeks to overcome these shortcomings.

The first volume, which covers the period November 1914 to November 1916, gives an introduction to the initial design and development of the first battle tanks. It provides details of the selection and training of crewmen and the tactical and logistic challenges associated with bringing a new weapon system into combat within one year after acceptance of the prototype. The impact of armored vehicles in the initial actions in 1916 was limited. However, as the British C-in-C Douglas Haig determined within two days of their debut on the Somme, tanks would soon become a key element in the all-arms battle.

The battle chapters of this initial and subsequent volumes analyses the part played by tanks in success or failure of the British Army until the summer of 1918, after which the tanks took the lead as American, Australian, British, Canadian and New Zealand forces drove back the Germans during a 100 day advance which culminated in the defeat of the German Army in the field.

Each volume is illustrated by contemporary photographs and tables showing the order of battle of tank units in each battle, as well the formations they supported, and the opposing forces, besides a selection of color photographs showing the battlefields today. It also includes a separate map book which enables the readers to follow the course of the battle. While designed for readers with a passion for detail of the development of the British Army during the last two years of the First World War, this new history aims to enable those with a general interest to gain an understanding of the part played by the tanks, their crew and their commanders in the destruction of the Germans' will to win, some six months before the planned start of the 1919 offensive. The tanks had successfully fought through the mud and the blood, to the green fields beyond.