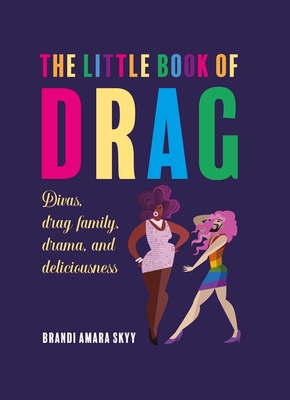 Drag is the ultimate form of queer expression and art, and with the success of RuPaul's Drag Race, it's now more widely known and popular than ever. Brandi Amara Skyy is the perfect guide to all kinds of drag under the rainbow umbrella. Brandi's inclusive appreciation of every form of drag enables them to explain the history, importance, and life-affirming qualities of drag for everyone. Starting with the question "What is drag?" Brandi explores where the term really comes from, and debunks the myths about it. The history of drag is covered next, including drag as subversion, as an art form, and in popular culture. Drag has evolved over the years and been adopted into the mainstream, including TV and films—but has it lost its edge, and where will it go next? Finally a resources section covers drag terminology, how to become a drag artist, and what to read and watch to find out more about drag. Profiles of the different kinds of drag artist feature throughout.
Brandi Amara Skyy is a writer with over 20 experience years in drag as a performer, pageant judge, and academic. Brandi has made history by winning the first Miss Diva USofA in 2014 and creating the first haute drag magazine, GAG Magazine. Brandi is also the founder and Head Witch in Charge of WOKE MAGIC (www.wokemagic.com). Brandi has been featured in The Advocate, Global Grind, Curve Magazine, and Latino Leaders Magazine, and they are the author of five books including The Little Book of Drag and Be More Drag (both Dog 'n' Bone), and How to Be a Drag Queen,. Brandi lives in Wimberley, Texas.