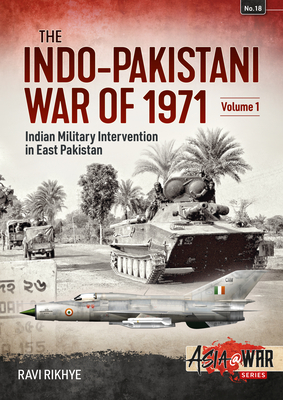 
Special Order—Subject to Availability
In 1947, India and Pakistan were partitioned by their former colonial ruler, Great Britain. A job that should have taken ten-years was done in a few months. Britain, drained by two world wars in 40-years, no longer had the will or the money to guide the subcontinent to a peaceful partition by consensus. More importantly, the subcontinent was impatient for Britain's departure. The British left in haste, leaving unresolved the issue of Kashmir. This triggered five wars between the new states: 1947-48, 1965, 1971, 1999 and continuing insurgency/counterinsurgency that began in 1987. Two other potential wars were narrowly averted in 1987-88 and 2001-02, and a limited one fought in 1999. Since the basic issue remains unresolved, the next war may be only a matter of time.

In 1970, East Pakistan voted for independence and armed rebellion. A quick and nasty counterinsurgency suppressed the rebellion. India, seizing the chance to change the balance of power, first backed East Pakistan, then on 21 and 22 November 1971 invaded with eight divisions. India planned also to attack West Pakistan to recover Kashmir, but at the last moment the offensive was called off due to Soviet pressure. Pakistan attacked pre-emptively, and an all-out war resulted. East Pakistan was overrun by India on 16 December; the US and Soviet forced a ceasefire in the West only a day later. For the first time in 800 years, a predominantly Hindu army defeated a Muslim army.

Through extensive use of official records and participant recollections, rare photography and authentic colour profiles, Ravi Rikhye tells the captivating story of the biggest military conflict fought between India and Pakistan to date, and the war that resulted in emergence of Bangladesh as an independent nation.