Austrian Cavalry of the Revolutionary and Napoleonic Wars, 1792-1815 (From Reason to Revolution) (Paperback) 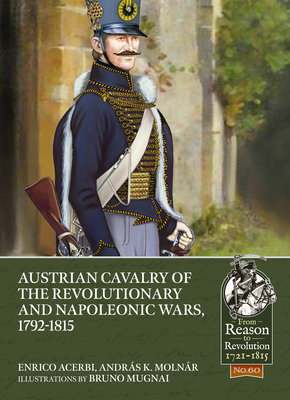 Austrian Cavalry of the Revolutionary and Napoleonic Wars, 1792-1815 (From Reason to Revolution) (Paperback)


Special Order—Subject to Availability
Austria was one of the five major players of the Napoleonic Wars. In early 19th century, the Austrian army (Kaiserliche-K niglicheHeer) was the third largest and one of the best-trained armies in the world. The individual regiments performed well and were considered solid. However, hampered by the inherent conservatism of the hierarchy, the Austrians had to face the most modern army in Europe. Despite the many defeats suffered, the Austrian soldiers performed with discipline and played a central role in the coalitions against France, from the campaigns in 1790s, to the Austerlitz campaign of 1805, the closely balanced battles of 1809, and the final victorious campaigns of 1813-1814. Austrian cavalry, in particular, was considered one of the best in Europe by allies as well as enemies. For the first time, this topic is introduced starting from the first campaign against France. The book includes the regimental histories of each unit after the original sources, unpublished iconography, and is completed by detailed illustrations depicting uniforms and equipment of the mounted 'kaiserlich' white coats.