Napoleonic French Military Uniforms 1798-1814: As Depicted by Horace and Carle Vernet and Eugène Lami (From Reason to Revolution) (Paperback) 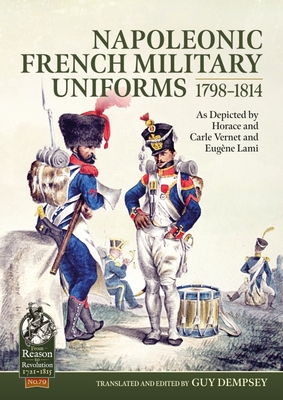 Napoleonic French Military Uniforms 1798-1814: As Depicted by Horace and Carle Vernet and Eugène Lami (From Reason to Revolution) (Paperback)


Backordered
Three talented French artists, Carle Vernet, Horace Vernet (son of Carle) and Eug ne Lami, capitalized on the wave of nostalgia for the First Empire brought on by the death of Napoleon in 1821 by producing a series of prints of French military uniforms of the French revolutionary and imperial armies. These colorful lithographs, each accompanied by a text by an unidentified author describing the unit depicted, were published in book form in 1822 as Collection des Uniformes des Arm es Fran aises de 1791 1814 (Paris: Gide fils, 1822). The broad range of uniforms depicted includes many from infrequently-illustrated foreign and auxiliary units in the French army. The images also include unusual back and side views of uniforms. The images in this book are contemporary watercolor copies of the prints and are reproduced with permission from the Anne S. K. Brown Military Collection at Brown University in Providence, Rhode Island, USA, where they currently reside.