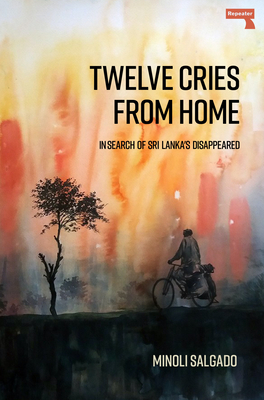 
Not On Our Shelves—Ships in 1-5 Days
Twelve Cries from Home speaks out against Sri Lanka’s official silencing of war crimes, reclaiming the stories of survivors who insist on being heard.

Since August 2020, the intimidation of witnesses and journalists has surged in Sri Lanka. Twelve Cries from Home navigates the memories and stories of twelve war survivors, mostly women and relatives of the disappeared, who wished to have their stories retold so that a permanent record might be made, and so that those outside the country might understand their experiences.

The outcome of a journey across the island in late 2018 by writer and Professor of Literature Minoli Salgado, who was revisiting her ancestral home, Twelve Cries from Home is deeply-layered and localised work of travelling witness. It returns to the concept of home as a place of belonging and security, which is a lost ideal for most, and uses a Sri Lankan measure of distance – the call, or hoowa – to ask how we might attend to stories that are difficult to tell and to hear.

Exploring the bitter complexity of war by presenting stories from four regions of Sri Lanka, it reveals the complex network of relationships between the agents of conflict and their victims, as well as the blurred boundary between victims and perpetrators, the role of informers and the process of ethical repair after traumatic experience.

Twelve Cries from Home offers a rare glimpse into a country subject to enforced self-censorship, allowing us to take stock of social and political developments in Sri Lanka and what has and has not been achieved in light of the transitional justice mechanisms promised to the UN.
Minoli Salgado is a novelist and academic who has written widely on literature from the cultural margins and witness writing. She is the author of three books that focus on the impact of the Sri Lankan civil war: Writing Sri Lanka: Literature. Resistance and the Politics of Place (Routledge 2007), A Little Dust on the Eyes (Peepal Tree Press 2014) and Broken Jaw (87 Press 2019). She is Professor of International Writing at Manchester Metropolitan University.