Stalin's Favorite: The Combat History of the 2nd Guards Tank Army from Kursk to Berlin: Volume 2 - From Lublin to Berlin July 1944 - May 1945 (Paperback) 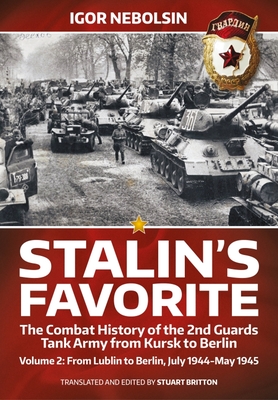 Stalin's Favorite: The Combat History of the 2nd Guards Tank Army from Kursk to Berlin: Volume 2 - From Lublin to Berlin July 1944 - May 1945 (Paperback)


Special Order—Subject to Availability
The author Igor Nebolsin continues with his detailed chronology of the 2nd Guards Tank Army's combat operations. This volume includes the hard fighting outside of Warsaw in the summer of 1944; the 2nd Belorussian Front's winter offensive in the Vistula - Oder operation and the ensuing combat in Pomerania; and the final assault on Berlin, when the 2nd Guards Tank Army enveloped the German capital from the north and entered the city from north and west, fighting its way to the Tiergarten Park in the heart of Berlin. The author also briefly discusses the 2nd Guards Tank Army's subsequent history as part of the Group of Soviet Forces in Germany, its eventual disbanding in 1997, and its reconstitution four years later on 4 September 2001. As with the first volume, the author's study is based upon the Army's operational documents from the Central Archives of the Russian Defense Ministry and recollections of its veterans, and received the active cooperation of Major-General Anatoly Shvebig, who was formerly a deputy commander of the 2nd Guards Tank Army's 12th Guards Tank Corps. It includes objective after-action reports from the Army's commander General Bogdanov and its subordinate formation commanders. Of note in this volume are General Bogdanov's recommendations for a tank army's table of organization and equipment and its proper use in combat operations, written shortly after the war ended. Illustrated with numerous images and supplemented with detailed tables, this volume completes the exhaustive study of the 2nd Guards Tank Army, "Stalin's favorite".