Never Surpassed: Ensign Leeke and the 52nd Light Infantry: the Peninsular War and Personal Experiences of the Waterloo Campaign, 1808-1 (Paperback) 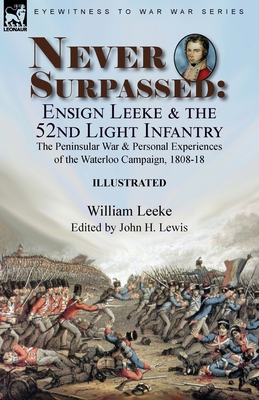 Never Surpassed: Ensign Leeke and the 52nd Light Infantry: the Peninsular War and Personal Experiences of the Waterloo Campaign, 1808-1 (Paperback)

Seventeen year old William Leeke marched to war for the first time in 1815 with the 52nd Light Infantry as a 'gentleman volunteer' thanks to his family's connections with the regiment's colonel, the highly regarded John Colborne. His place in the regiment quickly formalised, Leeke became an ensign tasked with carrying the regimental colour into the Battle of Waterloo. In later life Leeke wrote a substantial two-volume work which included his own experiences at Waterloo, a lengthy and controversial dissertation on the defeat of the French Imperial Guard in the closing phases of the battle and a history of the 52nd during the Peninsular War. As was common in the nineteenth century his writings were discursive and contained much material that did not concern the wars against Napoleonic France or any other military topic. Nor was his writing on military matters presented in a coherent chronological manner, which made Leek's interesting opinions and accounts, in their original form, difficult to access for modern readers. This unique Leonaur single volume edition of Leeke's military writings remedies these issues for the first time. His personal account of the Campaign of 1815 also includes the march to Paris after Waterloo and his experiences as a young officer with the Army of Occupation until the 52nd returned to Britain in 1818. With illustrations and maps.