On The Ho Chi Minh Trail: The Blood Road, The Women Who Defended It, The Legacy (Hardcover) 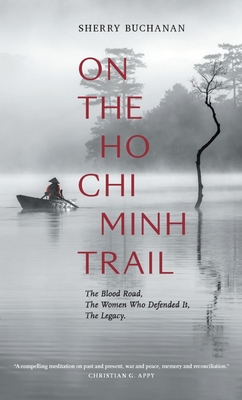 On The Ho Chi Minh Trail: The Blood Road, The Women Who Defended It, The Legacy (Hardcover)


Not On Our Shelves—Ships in 1-5 Days
Offering both a personal and historical exploration of the Ho Chi Minh Trail, this book highlights the critical role the Trail and the young women soldiers who helped build and defend it played in the Vietnam War. Accompanied by two traveling companions, Sherry Buchanan winds her way from Hanoi in the north to Ho Chi Minh City, formerly Saigon, in the south. Driving through the spectacular scenery of Vietnam and Laos, she encounters locations from the Truong Son mountains, the Phong Nha Caves, ancient citadels, and Confucian temples to the Khmer Temple of Wat Phu at the western-most point of the Trail in Laos.

Buchanan records her interactions—both scheduled and spontaneous—with those who experienced the Vietnam War firsthand. She listens to the women who defended the Trail roads against the greatest bombing campaign in modern times, walks through minefields with the demolition teams hunting for unexploded ordnance, and meets American veterans who have returned to Vietnam with an urge to “do something.” Buchanan weaves informative, and often humorous, tales from her journey with excerpts from the accounts of others, situating the locations she visits in their historical and political context. On the Ho Chi Minh Trail brings together geography, history, and personal accounts to reveal the scale of the tragedy, its harmful legacies, and our memory of it. Buchanan challenges American exceptionalism and calls for redress for those harmed by US military actions during the Vietnam War and America’s subsequent wars.
Sherry Buchanan is a publisher, editor, and author. Before she created Asia Ink, she worked for the Wall Street Journal and TheInternational Herald Tribune in Brussels, Paris, London, and Hong Kong.

"Never in my life have I finished a book in just a few days as I did On the Ho Chi Minh Trail. More than four decades after the fall of Saigon on April 30, 1975, Sherry Buchanan journeyed down the trail to meet actors and participants from all sides of the war, especially the women who built and defended it. By following in the footsteps of these young women, she has given them a voice and a face not too many people know about. She also brings to the fore the strategic role they played in the conflict."
— Le Ly Hayslip

"Buchanan’s interview style gives the women space to tell their own stories in their own words, reviving their youthful energy and dedication. . . . Also included are photographs that capture Vietnam’s beauty and contrasts—of mountain ranges swathed in blue mists that hide steep, death-dealing ravines; of a tank abandoned fifty years ago that rusts at the edge of a rice field. On the Ho Chi Minh Trail is a satisfying cultural history with insights into Vietnam and the women who fought for it."
— Foreword Reviews

"Intrigued to know more about the War from female perspectives, [Buchanan's] book is guided by interviews with former female soldiers who contributed to the building of the trail or fought in the war against the US Army. . . . The book is conveniently structured in chapters, as each marks a point in her journey from Hanoi to Ho Chi Minh City. In each city or place, she meets the female soldiers whose contribution to the war still has not been sufficiently appreciated and adequately honored in Vietnam. These are women balancing ammunition boxes on their shoulders, who fought side by side with their male counterparts, and who still remain  traumatized by the horrors of the war they experienced first hand."
— Asian Review of Books

"The Ho Chi Minh Trail was the quasi-mythical network of roads, paths and tunnels that North Vietnam used, in its war against South Vietnam and the Americans, to transport military supplies to its supporters in the South, the Viet Cong. On the Ho Chi Minh Trail is a travelogue, charting American journalist, author and publisher Sherry Buchanan’s trip down the trail in 2014, collecting the stories of the young women who played a vital role in keeping the trail open despite the constant American bombing. The book includes pictures of Vietnamese war art, maps and an itinerary (in case you want to follow in her footsteps!) and brings all of the author’s knowledge of Vietnam to bear."
— Five Books

"Buchanan tells the powerful story of the women who defended the Ho Chi Minh Trail, a network of roads and trails used by the North Vietnamese to supply their troops, defeat the Americans and their South Vietnamese allies, and unify the country. A journalist, expert on Vietnamese art and an historian, Buchanan has deep insight and understanding that flows through this historical reminiscence and travelogue. . . . Buchanan’s voice is lyrical. . . . By grounding her modern meditations on the Trail in an historic context, Buchanan has contributed to that process of gradual, person-by-person, healing and reconciliation."
— Ted Osius, former US Ambassador to Vietnam

"Combining travelogue, history, interviews, art, and 'endless empathy', this reveals the hidden history of the women who defended the Ho Chi Minh Trail against the most ferocious bombardment in modern times, during the Vietnam War."
— The Bookseller

“I look forward to giving a copy of On the Ho Chi Minh Trail to my father, who served in the Navy in Da Nang. I have no doubt that it would offer him—and all of the book’s readers—an illuminating, creative, and revelatory view of this conflict that continues to haunt the American psyche.”
— Erin Hogan, author of Spiral Jetta

“This is a fascinating account of the largely untold story of the courageous women who played a strategic role for the North by safeguarding the major supply route from North Vietnam to the combatants waging the war in the South. Buchannan provides new insights into the long conflict by illuminating the critical contributions of women who not only undertook a very dangerous mission in an extremely harsh environment, but also became a powerful force for reconciliation at the war’s end. We get to travel the Ho Chi Minh Trail with the author, becoming present-day witnesses to the compelling history of women who defended the Blood Road decades ago.”
— Melanne Verveer, former US Ambassador for Global Women’s Issues

"Buchanan takes us to a beautiful and haunted land where  hundreds of thousands of young women and men risked their lives in a staggering effort to forge a route to national unification against the greatest military power on earth. Combining travelogue, history, interviews, art, and endless empathy, On The Ho Chi Minh Trail is a compelling meditation on the relationship between past and present, war and peace, memory and reconciliation."
— Christian G. Appy, professor of history at the University of Massachusetts Amherst and author of American Reckoning: The Vietnam War and Our National Identity

"Buchanan takes us on the Ho Chi Minh Trail in a riveting and as relevant a journey today as it was fifty years ago. She charts new territory—-especially in the vivid, often heartbreaking stories of women who fought in the war as teenagers and the forced roles of housewives who stood on rooftops to shoot down U S planes that bombed their homes. Buchanan details—at times too much to absorb—the countless centuries of Vietnam's perilous path to freedom. But her vibrant writing and crystal clear interviews with women—their youthful dreams and present day realities—shine a powerful light on a war and a previously unexplored dimension that should never be forgotten."
— Myra McPherson, author of Long Time Passing: Vietnam and the Haunted Generation

"A riveting read of a hidden history. Buchanan reveals the untold story of the young women in Vietnamese war drawings who patriotically defended the Ho Chi Minh Trail during the American–Vietnam War (1965–1975). This book is essential reading for anyone wishing to understand Asian history from new perspectives."
— Jessica Harrison-Hall, curator, British Museum

"I have two vastly different, but enduring memories of the Ho Chi Minh trail. Firstly, as an Air Force fighter pilot bombing the trail, and 31 years later, as the first post-war U.S. ambassador to Vietnam frequently travelling along its length while engaging in bilateral diplomacy. Consequently, in reading Sherry Buchanan’s meticulously researched, stimulating and beautifully written On the Ho Chi Minh Trail, I felt like I was on the journey with her. The book is an exceptional travel log; the reader gets a superb geography lesson; a narrowly focused history of the trail during the war; and an introduction into Vietnam’s unique artistic and cultural identity including a primer on some of its exceptional cuisine. But above all, the author’s trip companion’s commentary and the heart-wrenching stories of the people (especially the women) they met along the way are what makes this book an absolute gem. Their remarkable stories of survival and sacrifice along with their remembrance of the hundreds of thousands who did not survive along the Trail will keep readers spell bound.”
— Pete Peterson, first postwar US ambassador to Vietnam and Vietnam War Veteran

"In On the Ho Chi Minh Trail: The Blood Road, the Women Who Defended It, the Legacy, journalist Sherry Buchanan adds another chapter to the conflict’s story by recording the War’s events from the perspective of the women who fought on its frontlines."
— Scheer Intelligence Podcast