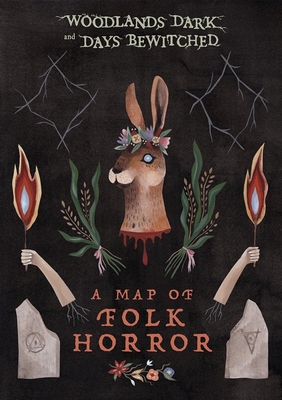 
Not On Our Shelves—Ships in 1-5 Days
This large-scale fold-out map explores the folk horror phenomenon from its beginnings in a trilogy of films - Michael Reeves' Witchfinder General (1968), Piers Haggard's Blood On Satan's Claw (1971) and Robin Hardy's The Wicker Man (1973) - through to the genre's revival over the last decade.

An exploration into horror cinema's folkways leads one into many strange corners all over the world. This map depicts a concentrated cluster of 36 locations where the films are set or staged - and where their core ideas sometimes spring from, from Scotland to Serbia. More often than not these places are separate from complex urban societies, and tucked away in the rural, in insular hamlets and villages. Places where the pull of the old ways can still be felt.