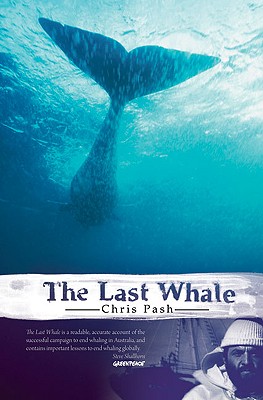 At the end of the 1970s, one young reporter bears witness to the final days of Australia’s whaling industry. Thirty years after the last whale was captured and slaughtered in Australia, this incisive account tells the very human story of the characters and events that brought whaling to an end. This fair and balanced account portrays the raw adventure of going to sea, the perils of being a whaler, and the commitment that leads activists to throw themselves into the path of an explosive harpoon. Accompanied by a wonderful photographic record of the time, this is the action-packed history of a town reliant on whaling dollars pitted against a determined band of protesters.

Chris Pash is a former editor, a writer, and an executive in the news and information industry.

"Given that whaling seems to be an eternally controversial issue it is a huge compliment to ex-journalist Chris Pash that he has managed to find an objective middle path in this engrossing story of the first Greenpeace campaign in Australia."  —Sydney Morning Herald

"[Pash] captures the shift in the public mood that made whaling morally unacceptable . . . Carrying the emotional freight of the story are intriguing characters on both sides, such as the Frenchman known as the Phantom."  —The Age

"Chris Pash portrays the campaign—the first direct Greenpeace action in Australia—as a tale of high drama in the Southern Ocean, with protesters risking their lives in little rubber dinghies as they attempt to obstruct the whaling vessels."  —Bookseller+Publisher

"A timely reminder of how far we’ve come since the days of routine slaughter, of how hard conservationists fought to bring it to an end, and how vigilant we must be in making sure that the dark days of whaling are behind us forever."  —Tim Winton, author, The Turning: Stories

"An important contribution to Australian history and to the protection of whales. From a historical perspective, it chronicles the people and events which created Greenpeace in Australia and it also seeks to understand the minds and thinking of those who hunted whales in Australia."  —Steve Shallhorn, CEO Greenpeace Australia Pacific

"Thoroughly researched and presents a fair and balanced account . . . vividly replays the events of that time. It is a history book, yes, but it's also a darn good read."  —The Sound Telegraph