Witches and Wizards: The Real-Life Stories Behind the Occult's Greatest Legends (The Supernatural Series) (Hardcover) 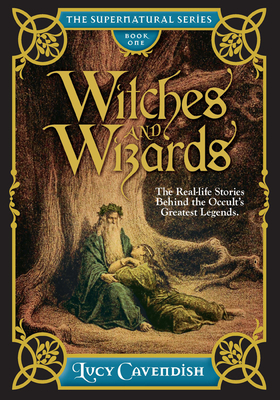 Witches and Wizards: The Real-Life Stories Behind the Occult's Greatest Legends (The Supernatural Series) (Hardcover)

Witches and Wizards reveals the real-life stories of the most notorious and powerful occult personalities of all time. Within its pages you'll discover the amazing stories behind the legends: from King Arthur's Merlin to the infamous Aleister Crowley, right through to the modern icons of Witchcraft. Shining light on the Salem witch trials, the Burning Times, the Magickal Battle of Britain, and beyond, this is a thrilling read for anyone who loves the mysterious, the true, and the strange.

Written by renowned Witch and author Lucy Cavendish, Witches and Wizards is an unforgettable read brimming with Magick, myth and mystery.

Lucy Cavendish is a natural-born witch who created Witchcraft magazine, one of the first magazines of its kind in the world, and is a feature writer for Spellcraft. She appears regularly on television and radio, explaining the craft. She is also a founding member of the Goddess Association. Lucy is the author of several previous books, including Magical Spell Cards, Oracle of Shadows and Light, Oracle Tarot Cards, and Spellbound, and the coauthor of Oracle of the Shapeshifters. Visit Lucy at www.lucycavendish.com.au.
"Cavendish (Spellbound) mixes together history, biography, and the religion of magick, under which umbrella the author includes wizardry, witchcraft, and the occult. Early on, Cavendish gives an excellent historical overview of famous figures who practiced magick, such as Merlin. The reader also learns how those who practiced witchcraft, and those accused of such practices, were treated unjustly. Through historical accounts, readers learn how accused witches were horrendously tortured by burning, hanging, and decapitation. In addition to stories of legendary witches and wizards, Cavendish also provides accounts of the lives of famous occultists, such as the flamboyant Aleister Crowley. Surprises abound as Cavendish delves into the influence of these legends over later figures, including the importance of Crowley to famous artists such as John Lennon. Cavendish's work is an important reminder of the contributions to society by those who have made practicing the religion of magick a personal endeavor." --Library Journal, (May 2017)
— Reviews