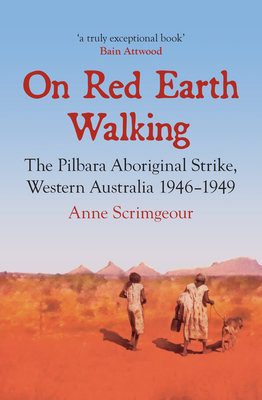 
Special Order—Subject to Availability
In 1946 Aboriginal people walked off pastoral stations in Western Australia’s Pilbara region, withdrawing their labour from the economically-important wool industry to demand improvements in wages and conditions. Their strike lasted three years. On Red Earth Walking is the first comprehensive account of this significant, unique, and understudied episode of Australian history.Using extensive and previously unsourced archival evidence, Anne Scrimgeour interrogates earlier historical accounts of the strike, delving beneath the strike’s mythology to uncover the rich complexity of its history. The use of Aboriginal oral history places Aboriginal actors at the centre of these events, foregrounding their agency and their experiences. Scrimgeour provides a lucid examination of the system of colonial control that existed in the Pilbara prior to the strike, and a fascinating and detailed account of how these mechanisms were gradually broken down by three years of striker activism. Amid Cold-war fears of communist subversion in the north, the prominence of communists among southern supporters and the involvement of a non-Aboriginal activist, Don McLeod, complicated settler responses to the strike. This history raises provocative ideas around racial tensions in a pastoral settler economy and examines political concerns that influenced settler responses to the strike to create a nuanced and engaging account of this pivotal event in Australian Indigenous and labour histories.

Dr. Anne Scrimgeour has worked with Pilbara Aboriginal people over many years and has undertaken extensive research into their history. She worked with Monty Hale on his bilingual autobiography, Kurlumarniny: We Come from the Desert and has publishing articles on the Pilbara strike and the Aboriginal cooperative movement that developed from the strike.