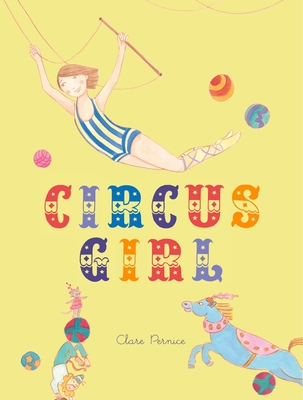 
Not On Our Shelves—Ships in 1-5 Days
When a little girl plays dress up in her leotard and socks she becomes Circus Girl star of the show. Even her toys morph into her dreamscape of circus acts. At each page turn she jumps and tumbles, flies through the air, juggles, spins, balances and contorts. Vibrant and winsome, modern and timeless the illustrations and words convey a captured childhood moment with directness and simplicity.
Clare Pernice was born and raised in England, where her passion for children's books took root. She was influenced by her imaginative, story-telling father and inspired by renowned local author, Roald Dahl who visited her school. Her childhood love for stories prompted her to write her own, creating both characters and illustrations at a young age. With an avid interest in children's books, art and design, Clare attended and graduated from London's Central Saint Martin's School of Art. She has designed and illustrated in Paris, San Francisco, Japan, Los Angeles, Charleston and New York. Her designs extend beyond book illustrations to include children's clothing, toys, murals and hand typography for which she earned an Addy Award. Clare has also created costumes and props for both stage and film. One garnered a "Best Costumes" Academy Award for her work on "Cyrano de Bergerac". Clare has since returned to writing and illustrating children's books in a studio filled with words, doodles, paper and paint. Her picture books are inspired by her own childhood and raising her two creative children. She is a culture enthusiast enjoying books and blogs, art and music, travel and people, theatre and cinema. Clare is an active member of the Children's Book Illustrator's Group and the Society of Children's Book Writers and Illustrators. She spends her creative time between Manhattan and the woods of Weston, Connecticut, where she lives with her husband, their two children and miniature dachshund Milo.