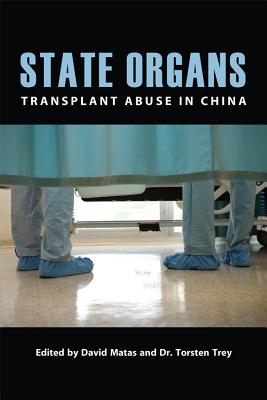 China's organ transplant numbers are second only to the United States. Unlike any other country, virtually all Chinese organs for transplants come from prisoners. Many of these are prisoners of conscience. The killing of prisoners for their organs is a plain breach of the most basic medical ethics. State Organs explores the involvement of Chinese state institutions in this abuse. The book brings together authors from four continents who share their views and insights on the ways to combat these violations. State Organs aims to inform the reader and hopes to influence change in China to end the abuse.

David Matas is an international human rights lawyer based in Winnipeg, Manitoba, Canada. He is the co-author, with David Kilgour, of Bloody Harvest: The killing of Falun Gong for their organs, published by Seraphim Editions in 2009. For their efforts in combating Chinese organ transplant abuse, the two Davids were nominated for the Nobel Peace Prize in 2010.Dr. Torsten Trey is founding member and Executive Director of Doctors Against Forced Organ Harvesting (DAFOH). After learning about the systematic harvesting of organs from living prisoners of conscience against their will, he decided to shift his focus from patient care to this non-profit organization.