Twas the Night: The Art and History of the Classic Christmas Poem (Hardcover) 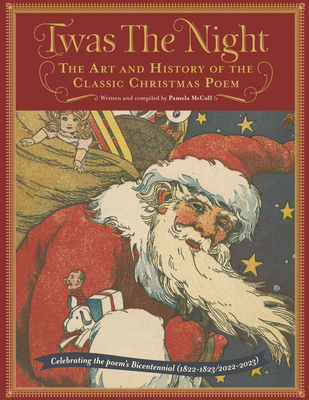 Twas the Night: The Art and History of the Classic Christmas Poem (Hardcover)


On Our Shelves Now at:
Twas The Night - The Art and History of the Classic Christmas Poem is the first cultural history to be published of the highly-celebrated poem A Visit from St. Nicholas, also known as Twas The Night Before Christmas. The artwork and literary references presented in this publication were selected to demonstrate the way in which "The Poet of Christmas Eve" drew upon two centuries of winter cultural traditions and customs, as well as elements from the spiritual and secular sectors, in the creation of the work. Dozens of vintage illustrations were carefully chosen for this publication from the thousands of editions published over years, along with examples of works by both commercial illustrators and fine artist who were drawn to the poem's enchanting imagery. Over two hundred images are presented in the book including artwork by Jessie Willcox Smith, N.C. Wyeth, Norman Rockwell, Andy Warhol, N.C. Wyeth, F.O.C. Darley, and the incomparable Thomas Nast. In 2022 and 2023 the poem marks two bi-centennial milestones; first read aloud by Clement Clarke Moore of New York on Christmas Eve 1822, with its print debut appearing in the Troy Sentinel newspapers of Troy, New York for December 23, 1823. The poem has been referred to as: " a little masterpiece of juvenile fiction" "one of the best poems for children ever written," "the most-published, most-read, most-memorized, and most-collected book in all of Christmas literature." This book is a celebration of the poem's brilliance and its phenomenon and enduring popularity.
In 2012, Pamela McColl published a revised edition of Twas The Night Before Christmas that attracted international media attention, from The Colbert Report to the BBC, her decision to edit out the reference to Santa Claus smoking a pipe was a topic over dinner tables from Brisbane to New York. In appreciation of the classic poem marking a bi-centennial anniverary in 2022/2023 McColl brings her extensive knowledge of the poem's history to this new publication. McColl studied art and history and went on to do graduate work in the field of cultural history before working as a corporate art consultant for 20 years. From there she launched an art and book publication company in 1997. This latest book production is the culmination of ten years of research into the 200 year history of the poem.