AHistory: An Unauthorized History of the Doctor Who Universe (Fourth Edition Vol. 3) (Paperback) 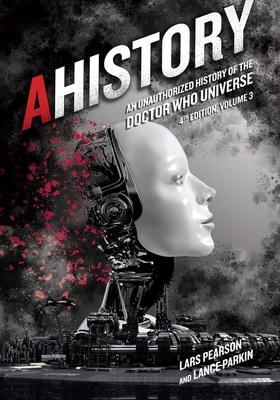 AHistory: An Unauthorized History of the Doctor Who Universe (Fourth Edition Vol. 3) (Paperback)

The Fourth Edition of AHistory amends and vastly expands (by about 40%) the work of Third Edition, continuing to incorporate the whole of Doctor Who into a single timeline. All told, this Fourth Edition takes about 2000 (!!!!!) full-length Doctor Who stories and dates them in a single chronology — starting with the Universe's origins and working its way forward to the end of time.

Specifically, this Fourth Edition covers all Doctor Who TV episodes through the end of the twelfth Doctor era starring Peter Capaldi (Twice Upon a Time); all New Series Adventures up through Diamond Dogs; the Big Finish audio range up through Static (#233); all Torchwood, The Sarah Jane Adventures, K9 and Class episodes, novels and comics; the Titan, IDW and Doctor Who Magazine comics; and a cornucopia of other Doctor Who spin-off series (Jago & Litefoot, Counter-Measures and more).

Volume 3 (of 3) of Ahistory Fourth Edition encompasses the Future History section of the Doctor Who universe — from the start of 2018 to its final, sputtering heat death.

All told, the three volumes of Ahistory Fourth Edition contain more than a million words of hardcore geeky analysis on the world’s longest-running Sci-Fi series.

Lars Pearson has served as editor-in-chief and publisher of Mad Norwegian Press since 2001, overseeing such works as the Hugo Award-winning Chicks Dig... essay book series and the (to date) eight-volume About Time series, a seminal work on Doctor Who. With Lance Parkin, he co-writes the definitive Doctor Who timeline Ahistory (now 30,000 words bigger than War and Peace). For three years, he was a staff editor at Wizard Entertainment, working on such magazines as InQuest Gamer, ToyFare and Wizard.

Lance Parkin is a British author, best known for writing fiction and reference books for television series, in particular some of the most influential Doctor Who novels (Father Time, The Gallifrey Chronicles, etc.). He also worked on the Emmerdale television series as a production assistant.