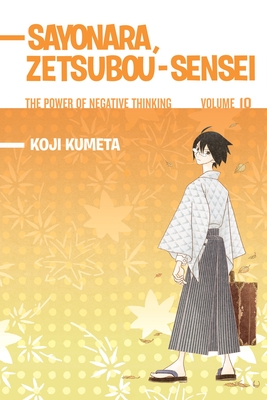 This is book number 10 in the Sayonara, Zetsubou-Sensei series.

Zetsubou-sensei and the students go on several unusual class trips, including an archaeological expedition, the Museum of Unnatural History, and Daisan Sentaku City– the city of the inexplicable third alternative. You know, like, when you're trying to decide whether to get a puppy or a kitten... and you end up with a crocodile? The students also practice selling themselves (legally), getting over their self-entitlement, the art of "soft landings"– a.k.a. breaking bad news gently.

Currently, he's serializing Sayonara Zetsubou-Sensei in Weekly Shonen Magazine, a bestselling manga magazine. It is his first work to be adapted into anime and has also won the prestigious 31st Kodansha Manga Award in the shonen [boys' manga] category. The author lives in Japan.