The Taming of the Shrew (30-Minute Shakespeare) (Paperback) 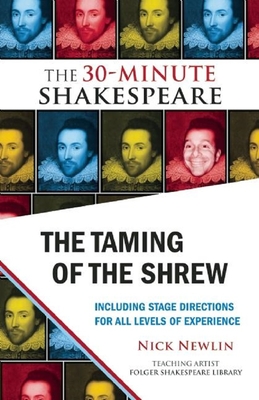 The Taming of the Shrew (30-Minute Shakespeare) (Paperback)

The Taming of the Shrew: The 30-Minute Shakespeare offers eight scenes from this broad comedy. Opening with Petruchio and Kate's bawdy war of words, the drama continues with Bianca's courtship by Lucentio and Hortensio, disguised as pedants. The adaptation climaxes with the outlandish marriage scene, and Petruchio's relentless taming of Kate. The play ends with Kate's famous speech in praise of women's submission to their husbands, at once hilarious and provocative.

The edition includes a preface by Nick Newlin, containing helpful advice on presenting Shakespeare in a high school setting with novice actors, as well as an appendix with play-specific suggestions and recommendations for further resources.

Nick Newlin: Nick Newlin has performed a variety act for international audiences for 30 years. Since 1996, he has conducted an annual Play Directing residency affiliated with the Folger Shakespeare Library in Washington, DC. Nick has a BA from Harvard University with Honors 1982 and an MA in Theater from The University of Maryland with an emphasis on Play Directing.