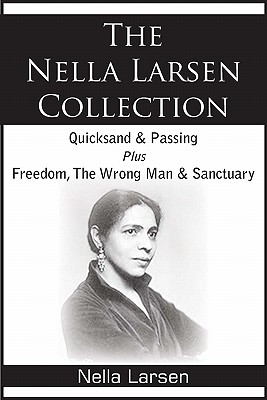 
Not On Our Shelves—Ships in 1-5 Days
(This book cannot be returned.)
The Nella Larsen Collection is comprised of five Nella Larsen fiction including; Quicksand, Passing, Freedom, The Wrong Man, and Sanctuary. Quicksand, Larsen's first novel, tells the story of Helga Crane who is the lovely and refined daughter of a Danish mother and a West Indian black father who abandons Helga and her mother soon after Helga is born. Unable to feel comfortable with any of her white-skinned relatives, Helga travels America, visits Denmark searching for people she feels at home with. In Passing Clare and Irene are childhood friends who lose touch when Clare's father dies and she moves in with two white aunts. By hiding that Clare was part-black, they allowed her to 'pass' as a white woman and marry a white racist. Irene lives in Harlem, commits herself to racial uplift, and marries a black doctor. Passing centers on the meeting of these childhood friends later in life, and the unfolding of events as each woman is fascinated and seduced by the other's daring lifestyle. Freedom, The Wrong Man, and Sanctuary are three stories about love, loss, mistaken identity, and death. Nellallitea 'Nella' Larsen was an American novelist of the Harlem Renaissance. Though her literary output was scant, what she wrote earned her recognition by her contemporaries and by present-day critics.