No Greater Love: How My Family Survived the Genocide in Rwanda (Paperback) 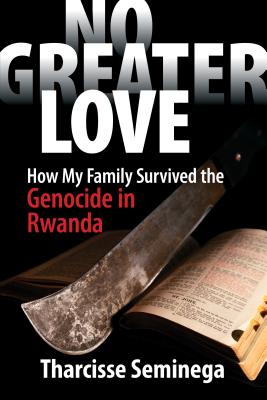 No Greater Love: How My Family Survived the Genocide in Rwanda (Paperback)

During 100 days in Spring 1994, Rwanda's descent into terror took an estimated 800,000 lives. The fastest-moving genocide in modern times was horrifying for its intimacy: Killers and victims were neighbors, friends, fellow churchgoers, workmates, even spouses. Murderers did their "work" with crude implements--machetes, hoes, nail-studded clubs--and lists of those doomed to die.

This was the terrifying reality for Tharcisse Seminega, a Tutsi professor at the National University of Rwanda in Butare. He was specifically targeted for slaughter, along with his wife, Chantal, and five children, with all hope of escape cut off--until help arrived in the form of Hutu rescuers who repeatedly put themselves in mortal danger to save Seminega's family from the machetes. No Greater Love is the true story of unwavering courage and extraordinary love shown by ordinary people who offered a ray of hope during one of humanity's most horrific self-inflicted tragedies.
Dr. Tharcisse Seminega was born in Kabirizi, Rwanda, in 1941, to a devout Catholic family. He grew to adolescence during the turbulent transition from Belgian colonial rule to independence. Seminega studied for the priesthood but later pursued his Ph.D. in biotechnology, becoming a lecturer in 1977 at the National University of Rwanda in Butare. It was in Butare and vicinity that Seminega and his entire family lived through the Rwandan genocide. In 2003, Tharcisse and Chantal moved to Canada with four of their five children.